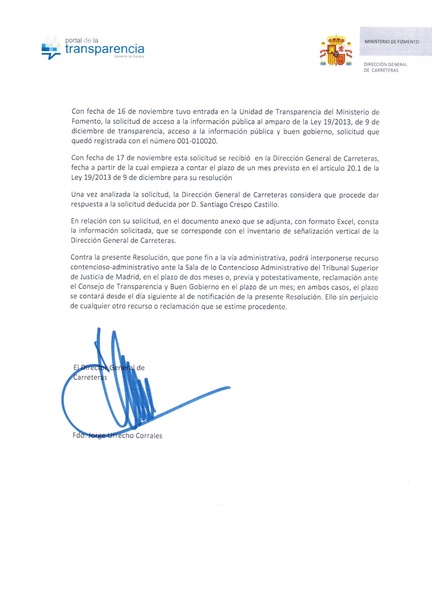 I did a request to Goverment for all the information about traffic signs located on state-owned ways. After 2 months, they sent an excel file with all the signs position, code and more, along with this signed letter.

This letter is is a goverment resolution, signed by Jorge Urrecho Corrales, Spanish Roads Director, and states that this data is published under the the law "Ley 19/2013, de 9 de diciembre, de transparencia, acceso a la información pública y buen gobierno." (Act 19/2013, of 9 December, on Transparency, Access to Public Information, and Good Governance)

Click on a date/time to view the file as it appeared at that time.

You cannot overwrite this file.

There are no pages that use this file.

This file contains additional information, probably added from the digital camera or scanner used to create or digitize it.

If the file has been modified from its original state, some details may not fully reflect the modified file.