This page contains information about what's coming in next releases of Kosmos. It also contains (more or less) up-to-date information about the development status of individual features and my (User:Breki) assessment of when you can expect new releases.

UPDATE: this page needs a thorough update. I haven't been releasing any new 2.x versions for a long time. To see what's been happening, read my blog posts on Kosmos. --Breki 20:18, 6 January 2010 (UTC)

The last section contains a "wishlist" of features which will hopefully be implemented some time in the future. If you have a particular idea on what you would want to see in Kosmos, please write it down on the talk page and if I'll add a short entry into the wishlist if I see that the idea makes sense.

Export of .png and georeferenced mapfile (.map) for Oziexplorer or OziCE.

Or even better support of the same files like taho.pl: Oziexplorer#Generate_an_pixel_map_with_calibration_using_tiles.40home_tiles

I've just executed Kosmos 2.3.213.0 on my Linux box out of interest. WINE suggested installing the windows version of Mono, which I did. And the most interesting part: Kosmos worked :) Here's a screenshot: 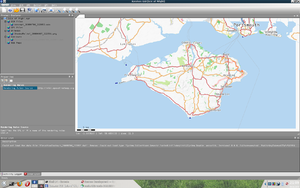 Of course, it works really-really slow, especially while re-rendering the map. But I think that's a good sign that the porting wouldn't be so difficult :) Or at least debugging the windows build, so that it works fast under Wine.

I've done some work on Linux porting for 1.x versions, but then I gave up mostly because of the speed issue (and because even supporting Windows takes a lot of my time). Implementing Kosmos so that it would work as quickly on Linux as it does on Windows would be a huge task, for which I just don't have the time. A large part of the graphics rendering code would probably have to be ported to some Mono graphics library, which requires a lot of work. Nevertheless hats off to Mono guys for doing a great job - I didn't expect Kosmos 2.x would still run on Linux. --Breki 18:26, 10 January 2009 (UTC)