From OpenStreetMap Wiki
Jump to navigation Jump to search
Tag:landuse=religious - Other languages

The area used for religious purposes, often for the grounds surrounding an amenity=place_of_worship, such as mosques, churches, cathedrals, synagogues, temples, etc. The campus (complex, facility, etc) can have further buildings related to the religious activities practised at the quarters, such as meeting halls, educational facilities, domestic quarters for the residing religious leaders, gardens, memorials, statues, historic relics, bell towers, grave yards and other common amenities, such as parking, storage, and other buildings in support of the main facility. Like amenity=place_of_worship it is generic in relation to a specific religion, which needs to be tagged explicitly.

landuse=religious is meant to eventually supersede amenity=place_of_worship when used on areas as a landuse, relegating Place_of_worship to buildings and other physical objects, with few exceptions. However, Place_of_worship is still has a very important role in designating which building or object in the land use is the actual location of the worship in the campus. Many religious facilities are large complexes made of many buildings, usually with only one or a few acting as a "Place of worship." The ability to separate landuse from Place_of_worship is particularly useful when a single landuse contains multiple Places of worship, sometimes even from different religions in a single, unified complex, such as the Asakusa Temple complex in Tokyo where a large Buddhist temple complex has many named buildings that are different "Places of Worship," and also has a Shinto shrine to honour the temple's founding members. This allows the overall facility to be named, as well as the buildings with the Place_of_worship tag to be properly named and tagged with the proper religion=* tag - while still conveying the purpose of the facility through the landuse=* key. This is similar to the relationship between landuse=retail , building=retail, and shop=* in a shopping complex.

landuse=religious is specifically meant for the area used by a religious facility and its supporting or directly related amenities used for practising the religion — not merely land that happens to be owned by a religious entity. Likewise, Facilities such as amenity=school or amenity=hospital that are not part of a primarily religious complex, or are not primarily a place of worship, but merely operated by a religious entity are represented with different tagging schemes, and would have the religious entity (E.g., ABC church of Anytown) listed as operator, and the religion and denomination tag added to the facility as well. Small buildings or places that serve as an amenity to to main religious complex, such as a preschool or a religious items shop, are merely an amenity of the main worship facility, and do not require a different land use. These should be tagged as any preschool or shop.

The grey area, such as when an educational facility is big enough to be tagged separately, or facilities only for members of a certain religion but without a building to tag as "Place Of Worship" - such as a private community centre for that religion, is still being worked out. 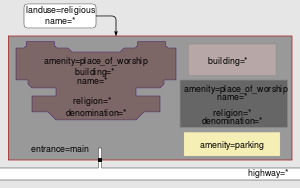 Typical tagging scheme (example with situation typical for Christianity - building that is used as place of worship, with surrounding facilities).

Add the religion and if known the denomination:

The campus can have an operator, such as a local religious community/parish or the regional/national religious organisation:

This should be the actual name of the organisation, not just the denomination which is tagged as above.

Draw a line repeating the same corner nodes as the landuse but with "gaps" for any gates and wickets:

In the absence of a fence line:

The actual mosques, churches, cathedrals, synagogues, temples - in other words the particular building where the worship is being hold on the campus - should be drawn as a polygon or mapped as a single node:

If some part of the religious campus is used as a grave yard, you can draw this amenity and tag

Bench in an alley