You can explain them here with one or two photos and they should be added if they don't get any objection. Fanfouer (talk) 12:32, 17 November 2014 (UTC) 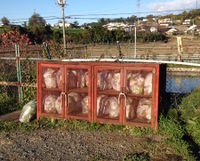 two different "Gomi Stations" in Japan. The cabinets are permanent (not dumpsters or cans), immobile, and long-lived (these are probably 15 years old or so). While they are for public garbage collection, they are not for general use by the public -so it is not a public trash can. Only people living in the area designated for each station may place their residential garbage inside. Similar to the mail distribution box, They are used as a transfer point for non-technical material. There is one station for roughly 20 houses or one large apartment building, so they appear with the same frequency as the other cabinets throughout Japan (read: there are thousands and thousands of them in each region). Javbw (talk)

I think street_cabinet=waste is appropriate, thank you for pictures. Do you see any additional tag to add to such an example ? Fanfouer (talk) 08:15, 18 November 2014 (UTC)

nothing beyond the standard operator tag. Usually there is no ref or other name given to them at all. Perhaps sugeest to use with access=designated? Only designated people can use it? Because there is no question as to which one is "yours."

On naming of newly voted man_made=street_cabinet

A few old & new proposals for actual naming are:

is implicitly rejecting 'countryside cabinet' or cabinets in motorways, parks, fields, train stations, airports and so on.

Yeah I would rather agree.
We also have the highway=* tag to describe one and each road, not only high-speed ways between major cities. Fanfouer (talk) 12:32, 17 November 2014 (UTC)

is quite generic. Is it excluding any kind of non-technical cabinet? I guess containers and collecting points are out of the scope with other tagging schemes, aren't they?

is also quite generic. Is it excluding any kind of cabinet?

It is excluding all indoor cabinets, especially when they're underground, in tunnels or whatever.
We also have a generic tag to describe features' location : location=* Fanfouer (talk) 12:32, 17 November 2014 (UTC)

is very generic, can serve as basis for a lot of equipment and applications, can be refined with namespace/subkey.

I guess it's kind of late for this, but I would have thought utility_cabinet or service_cabinet would be more appropriate than street_cabinet.--Rassilon (talk) 01:33, 23 March 2019 (UTC)

I think it would be desirable to distinguish optical and copper cable cabinets. Anyone already doing this? --Dieterdreist (talk) 16:18, 10 January 2017 (UTC)

Mention how to tag a simple electric / gas / water meter.

Hi, sorry for late answer. If such device is located ina cabinet, it should get the recommended tagging man_made=street_cabinet and so on...
As far as i remember, we don't have any recommended tags for power/water metter currently. It still needs to be defined, but you can yet describe the cabinet Fanfouer (talk) 15:46, 22 September 2019 (UTC)