Object Vision BV contacted OpenStreetMap in The Netherlands and offered us their 3D shapes dataset for import in our database. The license for the data was CC-BY-NC-SA but after some persuasion from User:Skinkie they agreed to re-release as CC-BY-SA.

Some doubts remained about the dataset, so User:Rejozenger approached the Planbureau voor de Leefomgeving (PBL), the government agency that originally commissioned the creation of this dataset, to confirm the usability of this dataset. In June 2010, he received the confirmation that this dataset is indeed usable by OSM. There are no restrictions imposed. In effect, this is an even less restrictive license than CC-BY-SA, and could be considered equal to PD.

The dataset is available for download at the Dutch OSM mirror in ESRI Shapefile format.

So what's in this dataset

Basically buildings, water and landuse for all of The Netherlands. Probably best to show in an image: 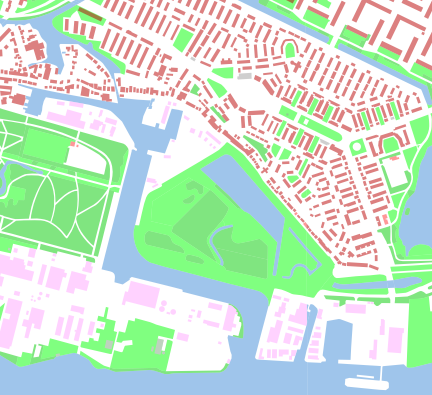 As you can see, the data is really detailed and there's also metadata available indicating the type of building, although this is by no means perfect.

We now have a separate preview rendering available at:

The different types of data are switchable layers.

We're also running a report of overlapping buildings. Often, some of the better-known buildings in a place have already been traced or guessed and so they're already in OSM. They might even be of better quality than the 3dShapes version. We just print out a list of overlapping buildings, so mappers with local knowledge can have a go at them. NEW: Some special 3dShapes KeepRight tests in a custom database. These tests are not in the main KeepRight instance.

More details (in Dutch) can be found on 3dShapes/Details.

The dataset also covers small parts of Belgium and Germany, near the border.