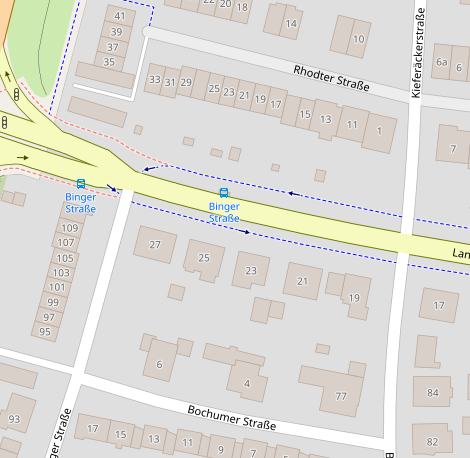 The scheme is (as anything in OSM) subject to change after everyone has gathered experience with tagging house-numbers and interpreting the mapped data.

Houses are geolocated next to streets. As such they are related to a way for their address but contain their own geolocation independent of their street.

The following tags are defined and in common use:

These tags work well in many countries. But other countries use very different ways of addressing that don't match these tags. Feel free to use other addr:* tags for other forms of postal addresses needed for your area. As long as you agree to the simple premise that buildings (or land parcels) have addresses you should be able to use this or an extended schema for your postal addresses.

Single house next to the way

The location on the way is calculated by finding the nearest point on the nearest street. (See below for giving hints about what street is meant.)

We may also use a polygon for the house (building=yes). If a single point for adding a adress is needed and a more suitable point cannot be determined (e.g. main entrance) the center of the bounding-box of the polygon can be used.

Using interpolation to mark many houses along a way

Parallel to the way representing the street we construct n nodes connected by their own way. This way has the sole use of describing the fact that house number interpolation should take place between the connected nodes (and what numbering scheme to use for interpolation).

We use linear interpolation along the way between any 2 consecutive nodes that represent an integer house number.

If there is a house number on a single node or single building polygon and that house number also appears as the result of an interpolation, software should handle this case gracefully and favour the individually tagged house number as the real position. Such conflicts should sooner or later always be corrected in the data.

Nodes that do not have an integer value for their addr:housenumber tag are ignored for odd/even/all interpolation (e.g., "12b"). Endpoints of interpolation ways of type "odd", "even", or "all" can not have house numbers containing non-integers.

Note: Some mappers use the "addr:street" tag on interpolation ways and leave it off the individual nodes. While of course everyone can tag what they like, this is not recommended by the inventors of the Karlsruhe Schema. The reason for this is that interpolation ways are supposed to be a temporary construct; we expect that once all individual houses have been mapped, the interpolation way can be simply removed without loss of information. They are not meant to stay.

You can use the interpolation method "alphabetic" to interpolate the alphabetical characters in the house number. So if you have all the houses from 7a to 7f in a row, you can connect them by a way tagged with addr:interpolation=alphabetic. You can not mix alphabetic interpolation with other interpolation methods. There is a special case for the Latin character set in which the first entry in the sequence is a number, followed by the number plus the letter A. For example, the range 25-25F means that the houses are numbered 25, 25A, 25B, …, 25F.

Giving hints about the road-access (optional)

In other words: Create a relation of type "roadAccess" with these members:

Instead of using the addr:street tag, it is also possible to use relations to provide a connection between housenumber and street. Those are more easy and less error-prone to evaluate in software. However, if you don't want to fiddle around with them, feel free to use the addr:street tag as described in the next section. Also, relations are much slower to parse by software if there is not enough memory to cache the whole dataset. Today, it seems a large majority of users simply stick with the addr:street tag.

According to Marcus Wolschon, one of both (addr:street or the relation associatedStreet) shall be enough. (See mail "Re: Hausnummernmapping & Relationen (Karlsruher Schema)" (Wayback Machine) from 2009-04-15 09:18:48 GMT on German talk-de mailing list).

Computers can easily add these relations where they are missing while pre-processing a bounding-box for searching.

Associating a node with a street

Hint: Computer programs that need to navigate house-numbers can create these relations internally from the first case as a step in pre-processing. Appropriate pre-processors will be provided.

Associating a building-polygon with a street 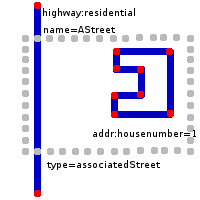 Associating a series of house-numbers with a street

A possible implementation may work as follows:

A reference-implementation of this can be found in the AdvancedAddressDBPlaceFinder of the Traveling Salesman navigator.