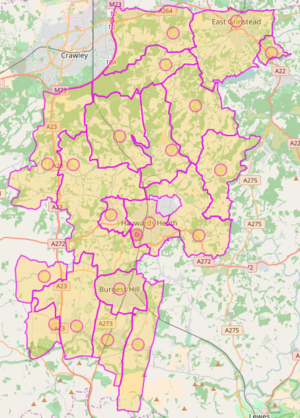 User:Semantictourist kicked off this initiative in 2013

The initial focus was on two aspects:

2. experimenting with OSM tags as a means to uniquely identify and re-use Neighbourhood Plan data.

If it works, the hope is that the project will:

1. encourage and involve local communities, e.g. to contribute mapping about planning and the environment in their local area; and

2. enable interactive tools to be built using an OSM-based map

A test dataset was based on 18 designated Neighbourhood Plan areas in mid-sussex.

User:Semantictourist worked his way through these areas, capturing and digitising neighbourhood plan boundaries, as published by Mid Sussex District Council [1].

The boundaries for individual Neigbourhood Plan areas are defined in various ways. The three main variations in the test dataset are:

I have used the following OSM tag combination to uniquely identify each Neighbourhood Plan area:

These reflect the fact that Neighbourhood Plan areas are an official layer in the administrative geography (boundary=administrative), but different to other designated areas (hence designation=neighbourhood_plan). They are also typically set at a level equivalent to Parish councils (hence admin_level=10).

I have included additional tags to provide further information about each area where this is available. Individual areas can contain one or more tags from the following list: