The tag usage, that's describe in the Rationale is still ongoing, even without the explicit deprecation (TagHistory graphic was updated). Unfortunately, no consensus could be reached on how to address the concern that namespacing railway would be a suboptimal solution. There were a few other secondary tags proposed on the Tagging-ML, but as there were no direct responses from the OpenRailwayMap-ML it's currently impossible to progress this proposal any further. --Kai M. Poppe (talk) 14:12, 28 June 2021 (UTC)

Explicitly mark the tag railway=preserved as deprecated and encouraging the use of railway:preserved=yes by changing all associated wiki pages.

railway=preserved has existed since 2007 with a peak of around 11,000 usages.

The downside of using railway=preserved is, that the original information about what kind of railway this part of track is, gets lost - i.e. it would be impossible to tag a heritage narrow-gauge or funicular railway.

In 2014, the second OpenRailwayMap meeting agreed to a contributor's proposal to deprecate railway=preserved in favour of railway:preserved=yes, but the proposal process was never started. 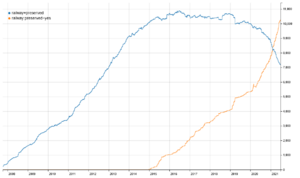 A major concern of some mappers is, that openstreetmap-carto currently doesn't render railway:preserved=yes correctly. There is an Issue at GitHub, and a Pull Request with a possible solution (rendering railway:preserved=yes in the same way as railway=preserved) addressing this problem, yet there is discussion as to solve this correctly - nevertheless, the issue is being addressed.