('tbc' is 'to be continued' e.g. tbc='housing estate here not mapped yet')

If you set out to map a place systematically (as I did with Chapel-en-le-Frith and Fulbourn recently), it's rarely possible to do it all at once. It would be useful to know the where the edge of the mapped area is and what areas remain within the local area. This would be removed as detail is added. This offers a hint to contributors as to where fruitful additions could be done, and to the consumer to show that what might look superficially complete actually isn't.

Think of how the OS shows the edge of national parks - that's the kind of annotation I have in mind. 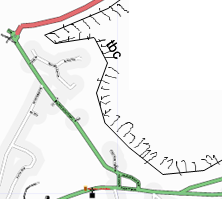 See also Towards in Proposed_features

With every street drawn through and empty area, there will be two more areas to be drawn to mark the emptyness on both sides... that will cause a huge amount of moved nodes to divide the empty area. Empty areas are identified by emptyness. That is enough! This proposal is stupid!--Lulu-Ann 21:24, 27 June 2008 (UTC)