This is the first stage of the TMC proposal. Goal of the overall proposal is to find a simple, useful, understandable and easily maintainable mapping scheme for TMC location codes. These codes allow a connection between TMC traffic guidance messages and OSM objects, so that OSM based navigation systems can calculate their routes under consideration of traffic messages. Goal of this first stage is to find a mapping scheme for the most simple TMC locations, which are points such as junctions or POIs.

In the first stage of the TMC proposal only TMC point locations are to be mapped. These can be either isolated points, which are not connected to the road network, intermediate points along a single road such as bridges or tunnels, or junctions between several roads. Each TMC point location, which is uniquely identified by a country ID, table code and location code, should correspond to exactly one TMC relation in OSM. Some places, such as motorway intersections, have more than one location code - one for each motorway. These should be mapped using more than one TMC relation, one for each location code.

There can be two types of members in a TMC point relation:

The tagging scheme for TMC point locations as proposed here is designed to be as simple as possible, so that the effort required to map TMC points is low. Every TMC point can easily be found using the coordinates, name and description provided in the TMC location code list.

Already this simple tagging can be used for routing / route planning with TMC messages. With TMC points connected to OSM nodes on the corresponding roads a router can easily find all TMC points which are passed on the calculated route, and filter TMC messages accordingly before providing them to the driver. Certain messages such as road closures or blockages may also cause the router to avoid the corresponding points and trigger a new route calculation based on this information. Similarly, also messages which concern closed / blocked rest or service areas or other types of infrastructure can be used to guide the user to a different location, if necessary.

Every TMC point, which is uniquely identified by a country ID, table code and location code, should be mapped using one relation tagged as type=tmc:point. The members and tags of this relation should be as follows.

A TMC point location may contain two different types of members: nodes on the road which are used for navigation, and elements of infrastructure, which may be affected by TMC messages.

Nodes on the road 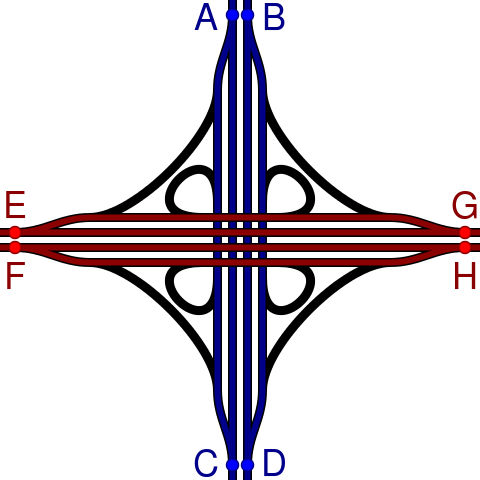 In some situations there may be fewer nodes:

The role of these relation members should always be empty.

Elements of infrastructure which belong to TMC points may be service or rest areas (including parking spaces, restaurants, gas stations, motels) or tourist attractions, see TMC/Location Code List/Location Types#Point location types for an overview of possible point location types. OSM elements which may be affected by TMC messages should be included in the corresponding TMC point relation. These include in particular:

Relation members should have the following roles:

The following tags should be present in any TMC point relation:

The following tags do not apply to all TMC points and should be used only when appropriate.

Some TMC points have names listed in the location code tables. These can be tagged as follows:

Some TMC points contain the name or reference of a second road which intersects their containing road, such as the intersecting road at a motorway junction. This can be tagged as follows:

If the TMC point is part of the road network, it may have an associated road name:

Similarly, it may also have an associated road number:

TMC points such as motorway junctions or intersections may also include a junction reference number, which can be tagged as follows:

All tags containing names and references can be used to display additional information to the end user.

Presence depending on direction

Some TMC points are present / available only for drivers who are passing them by when they drive in one direction, but not in the other. Examples are service areas or rest areas along motorways, which are present only on one side of the road. This can be indicated as follows:

If the TMC point is part of the road network, the location code table contains its neighbouring points along the road it belongs to, called the positive and negative offsets. If they are present, they should be tagged as follows:

Positive and negative offset are always contained in the same table. It thus suffices to tag table=* only once to the whole relation.

Links to other TMC locations

The following examples show some typical applications of the proposed TMC tagging scheme.

No other tags are affected by this proposal.

In order to simplify mapping TMC point locations as far as possible and to minimize the mapping effort, a semi-automated import is to be used. This means that a script will generate most of the OSM data automatically. Mappers only need to review this data, possibly correct errors, add missing features and upload the result to OSM. Mappers need not enter any tags, such as TMC location codes, or names, by hand. The following steps can be done fully automatically, using the remote control feature of JOSM or Merkaartor:

This leaves only the following steps for the mapper:

The user need not check the location code numbers or other numerical data. A quality insurance check can perform the following tasks: