This feature is merged with Proposed_feature/Guidepost

Signposts are often found along official hiking/cycling routes to indicate the directions to different destinations. Additionally they often state the name of the region and the altitude. Therefore signpost in a map are useful for hikers as a navigation and route planning feature.

The position of a signpost can be used by a hiker/biker as a confirmation of the current position, especially if he uses a printed map without a GPS receiver. 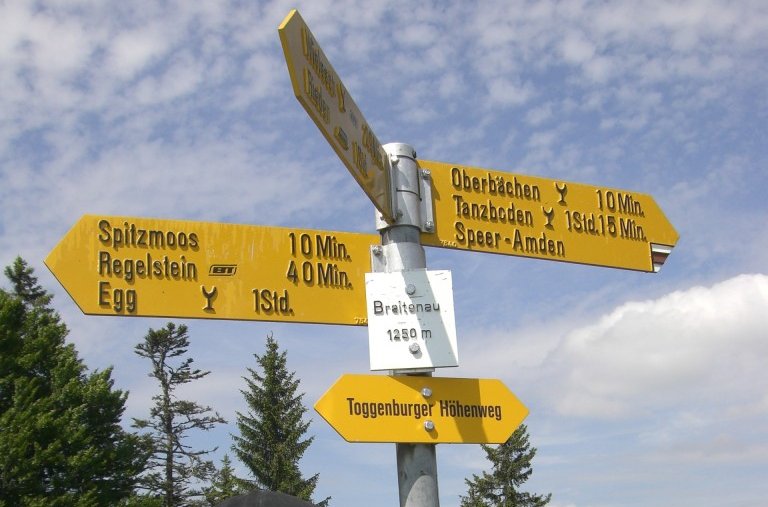 This should probably be rendered as a symbol overlay, similar to the current toilets or recycling nodes and showing the name and altitude if available.

I fully support this proposal, signposts are important for orientation and are rendered also on commercial maps. You can see example on this map from mapy.cz - signosts are the small thick black crosses. It would be very nice to have something similar in OSM. --Vrabcak 10:17, 21 July 2008 (UTC)

I support strongly this proposal. I'd already used quite a lot of highway=signpost tags, which I renamed to amenity=signpost today. I prefer the symbol used on the mountain maps of the german alpine club DAV, because it can be rendered very small. --Netzwolf 17:21, 3 September 2008 (UTC)

I support the idea to map signposts. But I prefer information=guidepost because there are several useful information=*-tags that all belong to different singposts, maps, boards etc. Check this Wiki-page. --Geogast 22:04, 12 February 2009 (UTC)

Signposts usually show distance to destination or time required to get there. I think it may be useful to include this information as well. It's possible to get estimation of distance from map, but for example in mountains it will be quite different from the real distance.

I suggest to use following relation: