In German OSM-Forum several discussion started about the kind of mapping lanes to make OSM-based advanced navigation possible. [1] [2] [3] At the moment there is more or less an agreement, that sheme [4] in combination with [5] should be used and modified.--Hurdygurdyman 13:16, 31 October 2012 (UTC)

There is also the position that neither single nor double white lines should be a reason for splitting a highway into two separate oneways, and that mapping style should be reserved for actual "physical separation" (with a barrier, e.g. guardrail, grass strip, wall). From this point of view, representing a highway painted with certain road markings as two separate oneways will become obsolete if we agree on a road marking tagging scheme (such as the previously proposed divider=solid_line/solid_area/dashed_line/... scheme).--Tordanik 16:27, 31 October 2012 (UTC) 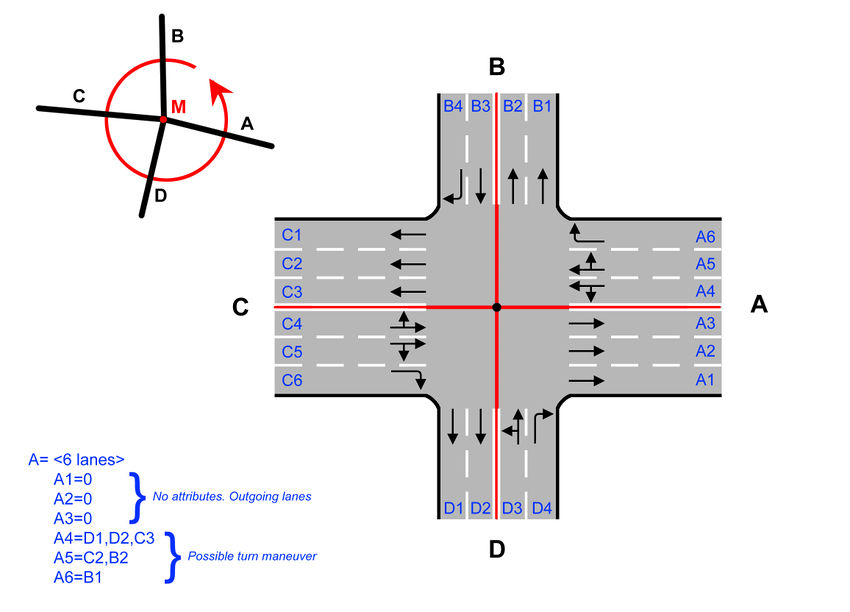 Which OSM way does a lane of an OSM way connect to at the end node in view of traffic flow? In case of backward direction the end node has to be replaced by the start node of the OSM way.

This is a special case of the previous issue. At the interconnection lanes could end or be added. The router needs to know how this is done.

Lane Change within an OSM Way

This variant is limited to changes to the next lane

This variant can also cover lane changes to the next but one lane using special values. This might be required in case a bicycle turn lane is between the lanes.

How to specify the ability to change to a lane of an adjacent OSM way. This is required in case of some lane mapping with different OSM ways.

The navigation system needs to generate reasonable instructions for the driver.

The angle between OSM ways at the interconnection point is not a good indicator of the type of turn manoeuvre.

In view of the destination driving instructions needs to match the signage on the road. Unfortunately destination signage might be different for different roads towards the interconnection. Therefore purely using the destination of the road leaving the crossing is not sufficient.

Angular distortion due to the lateral offset

Splitting of OSM Ways due to Lane Tagging

The structures which are used for advanced navigation need to be compatible with macromapping. Otherwise the navigation structure will likely be destroyed in future due to micromapping. The best way to achieve the compatibility is exactly drawing of street area as a pysical limitation for rendering of lanes.

This means the schema must work with areas and lines or it will not work in long term. It should be an area schema which can be reduced to a line variant, such as 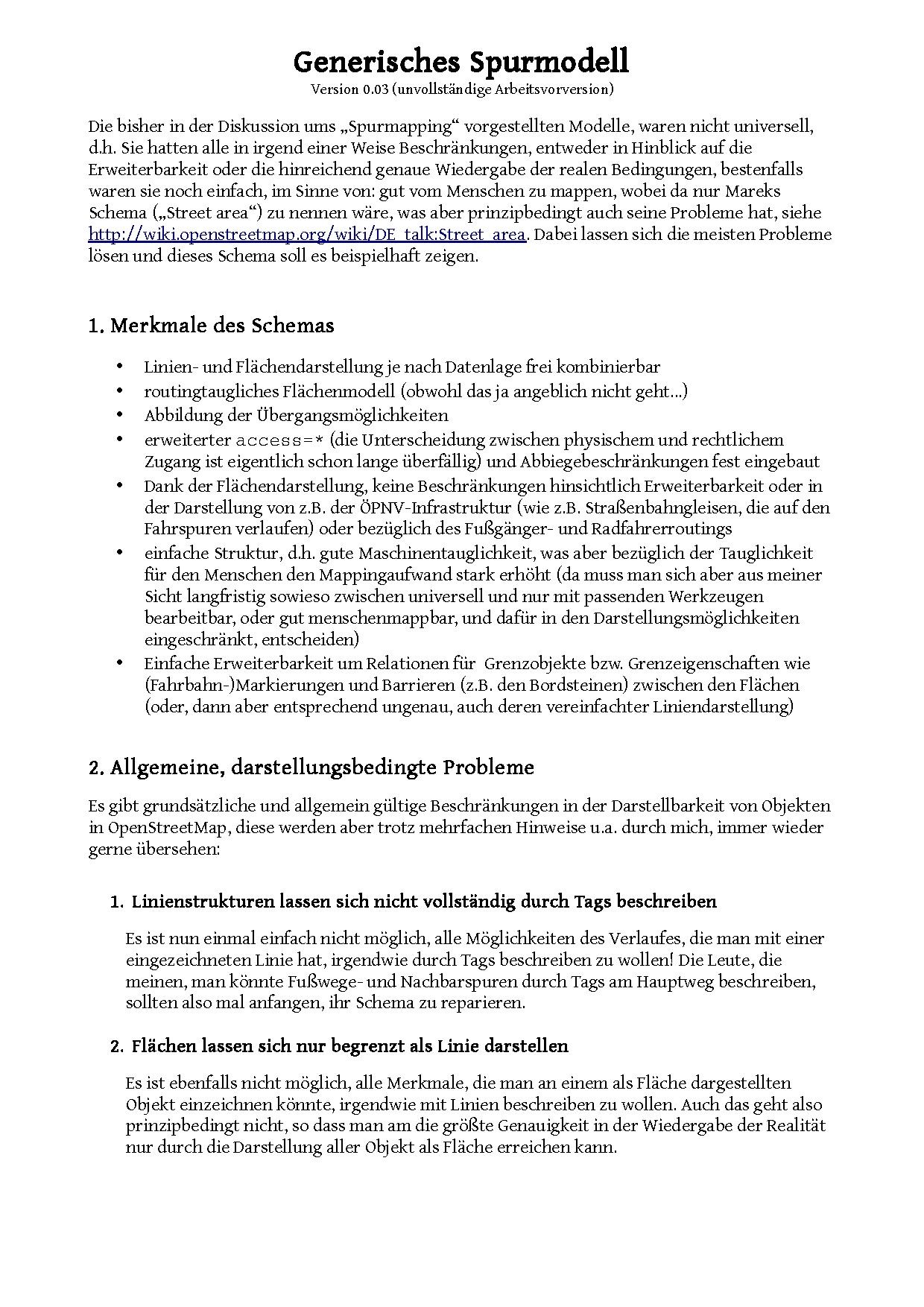 This tag could be used to specify how a vehicle can turn at the end of the OSM way or the lane in view of the physical angle between osm ways. The values of a turn:lanes tag can be used as a default for turn:physical:lanes, but "none" has to be translated to "all" because no turn marking means the vehicle can turn in all directions.

This tag could be used to specify how a vehicle can turn into the lane at the beginning of the OSM way or the lane.

Lanes could be labeled with a name using a key like

This name could be used in an extended variant of key:turn or key:turn:lanes to specify the connected lane of the subsequent OSM way:

The lanename needs to be unique within all OSM ways connecting to the end node of the OSM way which is using the lanename in its turn tag.

In principle label names can be freely chosen, but a naming conventions seems to be useful. The label name should consist of:

Instead of defining lane labels explicitly they can be generated by numbering the the OSM way and their lanes automatically.

Automatic Numbering of connecting ways at the interconnection

Beginning at an starting angle the Osm ways at the interconnection can be counted (for example using letters) in counterclockwise angular direction. Unfortunately the starting angle needs to be adjustable by tagging because ther must not be any OSM way at the interconnection with a similar angle. Otherwise minimal geometric changes could change numbering, and disturb the routing information accordingly.

Adding or removing an OSM way at the interconnection is also disturbing the method. Especially this can occur due to splitting an OSM way into two antiparallel oneways.

Automatic Numbering of lanes within an osm way

Within an OSM way lanes can be numbered automatically, but there are also some disadvantages: Special purpose lanes like bus or cycling lanes can not be easyly identified by the labelling. Along consecutive sections of a highway the lane numbers of the straight lines are often changing because sometimes turn lanes are added on the left or right side.

A key change=* with values right, both, left could be used in order to specify the ability to change to the next lane on an adjacent OSM way.

Values denoting a position within an OSM way

With <count> and <offset> being numbers the following values could denote a position within an OSM way:

<count> nodes behind the first node of the OSM way

<count> nodes before the last node of the OSM way

<offset> meters behind the first node of the OSM way

<offset> meters before the last node of the OSM way

<offset> meters before the node, which is <count> nodes behind the first node of the OSM way

In order to compensate lateral offset at the connection of two consecutive OSM ways due to ending or starting lanes both OSM ways could be mapped at the correct position, but a lateral segment has to be added to one of the ways for logical connection. This segment does not exist in reality. Therefore Key:virtual with values first, last, or both can be used in order to mark the first or last segment of an OSM way to be nonexistant in reality. Calculations of the interconnection angle must ignore such virtual segments.

In order to compensate lateral offset at the connection of two consecutive OSM ways due to ending or starting lanes both OSM ways could be mapped at the correct position. The logical connection can be realised using an additional OSM way in lateral direction, which is tagged with highway=lateral_connection.

The lane_position OSM way needs to be connected to the main OSM way of the highway. A virtual segment could be used if required. An indirect connection using an OSM way with highway=lateral_connection is also possible.

This key can only be used in combination with Lane Labeling. It is intended to override the rendering position of a lane of an highway. Being used on the highway itself this key specifies a specific lane to be aligned to the position of the OSM way instead of the center of the road. The tag can also be applied to any OSM way alongside the highway (within a limited distance). In this case the specified lane of the highway is aligned to the other OSM way.

Multiple values, even for different highways, can be combined within one tagbeing separated by a semicolon.

Using a relation combining the highway with other OSM ways to which lanes can snap for rendering is likely beneficial, but not essential due to limited distance. A single relation can contain multiple segments of an highway.