This proposal concerns the outlines of urban areas. An urban area is an filled polygon defined by an area where there are built-up buildings, and the entrances and exits are most often indicated by traffic signs.

These zones are defined by the local authorities who define the outlines and the position of the traffic signs which mark the entrances and exits (Tag:traffic sign=city limit).

These zones make it possible to differentiate the urban area of a (city/village) and to be able to apply different regulations to the inside or outside of this zone.

In addition and as observed in the survey, the surface representation of this area also makes it possible to calculate a "size" and thus to be able to use it. 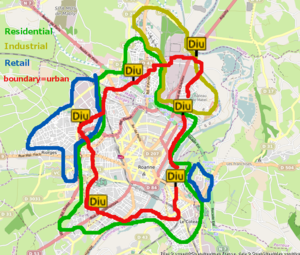 This urbanized area includes all or part of residential, commercial and industrial areas.

Example : in which the boundary passes through a commercial area (landuse=retail) because it is a boundary between two municipalities

Use additional tags to describe the name :name=urban name with various situations where we need to handle multilingual names.

The name should be the one on the traffic_sign = city_limit tag

How to draw the area

The plot of this perimeter must go through the traffic_sign = city_limit nodes.

On the image opposite we can see two cases of city_limit positioning which are accepted according to the wiki. Possessed at the location of the traffic_sign and / or positioned on the traffic lane. In both cases the route of the boundary = urban must passed through the city_limits.

At the intersection with the traffic lane it is necessary to create a common node which will allow to use this polygon to "apply" different things inside or outside the perimeter. 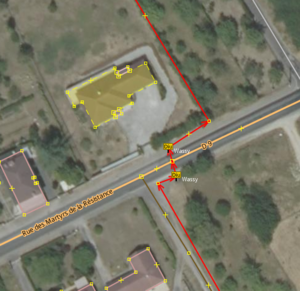 The boundary = uran must encompass all parcels of land accessible by roadways within the same perimeter.

In the example opposite the city_limit is along the house. The boundary = urban encompasses the house because its entrance is within the perimeter