Classification of campgrounds that are accessible for the general public (tourism=camp_site and tourism=caravan_site) by their designation and commercial operation.

Camping is done in the following types of accommodation:

The proposed tags are in particular important in areas with few or no regular campgrounds. They show (sometimes desperately needed) alternative options for camping, but prevent that the alternative is confused with regular, designated campgrounds. Overlanders, people who travel for a long period with their own vehicle over long distances, often in developing countries, need this type of information. The tag is not intended for classification of campground facility levels, access by specific groups or pricing. 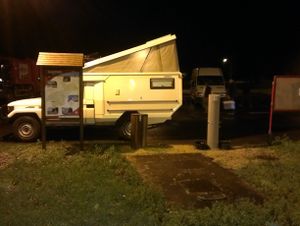 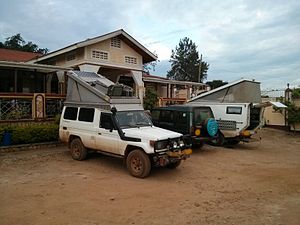 Supplementary campground type: camping in front of a hotel in Uganda 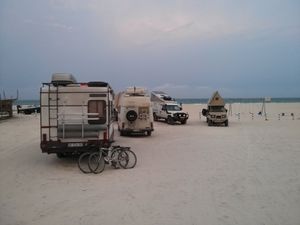 The proposal applies to nodes and areas.

For rendering the following symbols should be used:

Instructions for voting. Log in to the wiki - top right corner of the page -scroll up. Then scroll down to voting and click on 'edit'.

Copy and paste for

Note The ~~~~ automatically inserts your name and date. Please refrain from publicly commenting on other peoples votes, no matter what the comment is, they are entitled to their ideas. Discussion should have settled any issues and the proposal should have adequately described the feature. Further discussion here is too late.

Backcountry looks to be for non motor vehicle access .. while all of the above photos show motor vehicle access! I think you have not understood the meaning of this proposal. Place yourself in, say, Africa at a location where there are no near by hotels, commercial camp grounds and you want a place to camp.. this is not 'backcountry' it is inhabited. Warin61 (talk) 02:01, 3 April 2015 (UTC)

At the end of the (extended) voting period 7 votes were in favour of the proposal, 5 votes opposed while 1 abstained. Although the percentage of voters agreeing (54%) was sufficient for approval according to the old rule (requirement: >50%) and the number of votes (13) was sufficient for approval according to the new rule (>9) nether requirement for approval was met. The proposed tags are serving a small group of people (although they are very important for this group) and most negative votes seem to be caused by insufficient familiarity of the voters with the specific needs of that group. Therefore I have decided to set the status of the proposal to undefined. The group of users concerned will continue to use the proposed tags. --Jan van Bekkum (talk) 19:13, 21 April 2015 (UTC)

To clarify: under the old rules (which were changed one month before this vote), 8 unanimous votes or at least 15 votes with majority support were required for approval. Under the new rules, at least 75% positive votes are required for proposals that receive more than 10 votes. So this proposal was clearly rejected under either standard. --Jeisenbe (talk) 14:08, 10 April 2019 (UTC)