This tag is intended for free-standing markers, frequently on roadsides, designating historic events as officially recognized by an authority as worthy of recognition for its historic value.

Historic landmarks come in many forms ranging from plaques on buildings to signposts to large, free standing structures. Currently, OSM recognizes historic monuments and memorials as official features. Historic landmarks differ from these features as they may not memorialize a person or group of persons. Instead, they provide brief snapshots of history that may involve people, locations, events, buildings, or other miscellaneous historic facts that occurred near the marker's location.

As they are historic in nature and are often placed by governmental agencies, they are likely to be permanent fixtures that can be relied on to be in place for the foreseeable future. Many organizations use a unique standard for the appearance of their markers making them easily identifiable from a distance.

This permanency allows them to be used as a fixed navigation as many are placed in rural areas that lack features that can identify a location. Indeed, many of the markers themselves are initially hard to find due to their remote location. Once located they make an excellent reference point for navigation in areas lacking other identifiable reference points. The ease of visually identifying many historic markers allows them to be noted even from a moving vehicle.

In addition to being used as fixed navigation points, historic markers can be destinations for both travelers and locals interested in history. As noted above, the markers may be hard to find due to their rural nature (e.g. Marker is located on route 999 about 2 miles north of Sometown.) Having an exact location based on an onsite survey would aid in location of the markers.

Most states in the United States have a historical marker program as do many lower level agencies such as counties and cities. There are a few fan websites on the Internet devoted to historical markers. The Historical Marker Database (http://www.hmdb.org/) currently has 57,489 markers listed. Markeroni (http://www.markeroni.com) currently has 161,237 markers listed. The state of California has over 1,000 markers (http://ohp.parks.ca.gov/?page_id=21387). 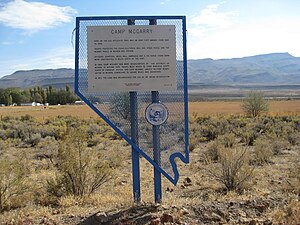 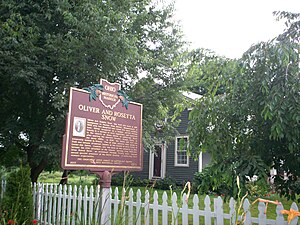 As mentioned above, this proposal is similar to historic monuments and memorials but differs in that it does not memorialize people.

A node, frequently located on a roadside, on a sidewalk or on a building.

There are currently icons for historic memorials and monuments. This feature could be rendered in a similar fashion.