empty marketplace with designated places for street vendors, note that some are under the roof

Street vendors at marketplace in Poland 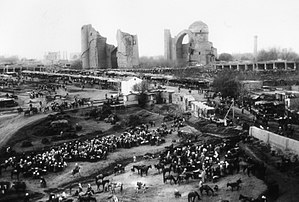 Pernament shop=kiosk. Such kiosks do not qualify for street_vendor=yes, even if described as "street vendors" in local law

Watermelons sold directly from car. If someone consistently sells at specific location it may be tagged as shop=greengrocer with street_vendor=yes added to make resurvey by other users less complicated and less confusing

Note that it is just an addition, not a main tag. For example street vendor selling shoes in the same location (acting as a shoe shop) would be tagged as shop=shoes + street_vendor=yes.

Street vendors are on the edge of mappable features. Street vendors without constant position are not mappable, but ones that appear consistently at the same location, or location that always have street vendors offering the same products may be mapped.

As such shops are at the same worth tagging and disappear completely outside their opening hours it is useful for other mappers to explicitly note this. It allows easier distinguishing between misplaced shops and correctly market street vendors. It gives additional info that such objects should not be deleted without survey during their opening hours. For example, survey of marketplace during night is sufficient to confirm that some roads or buildings are gone but is not sufficient to delete shops operating as street vendors.

Street vendors are on the street (including pedestrianized streets, narrow street or footpaths). Either there are no solid barriers like walls that block access to given location or shops is regularly dismantled.

Street vendors may offer products or services. It includes for example food trucks that are not permanently staying in one place, products sold from cart, portable table, portable or partially dismantled stalls, tent, or by somebody holding products for sale.

Street vendors may sell any kind of product (see shop=* for examples) or service (ranging from shoe cleaning to surfing lessons).

Street vendors may appear outside, under roofs (sometimes special roof over marketplace area) or in public buildings like train stations. They do not have a dedicated permanent buildings.

It also may be, in rare cases, useful for some data consumers.

Add street_vendor=yes to mark object as a street vendor. Except very unlikely situations street_vendor=no is not useful, street_vendor=* must be always added to primary tag, it is never sufficient on its own.

Note that this proposal is not changing what is considered OK to be mapped. Objects without specific location, for example street vendors changing their position each day or not staying at specific location are not mappable as shop=* as it is not possible to mark their location.

It may be also useful to apply it to amenity=marketplace with this characteristics (partially/mostly disappearing), especially in cases where individual sellers are not yet mapped or are not mappable at all.

During discussion some people expressed desire to mark also objects like mobile libraries (library in a truck, stopping at specific location at specific time), but there is no known good tag name to cover both this and street vendors.

street_vendor=* should not be considered as having default values or being implied by other tags.

During day it is an empty spot on the sidewalk.

Tag:street_vendor=yes would be created, Key:shop#Miscellaneous would be modified to list this key.

As street vendor may be not directly along the street but on bazaar/marketplace and be next to footway some expressed desire to find a different tag name like open_air_vendor=* and outdoor_vendor=*. Both are still problematic as some street vendors operate in buildings or on streets that are covered.

are very similar but tag name does not fit well. At this moment there is no proposal for name that would solve this idea and would be overall better, ideas are welcomed.

mobile=* is unclear and obvious meaning is something related to cell phones.

static=* fits all objects, but meaning of it is not obvious.

shop=street_vendor - this tagging scheme makes impossible to specify shop what is undesirable, when used for objects like amenity=fast_food it wrongly claims that such object is a shop.