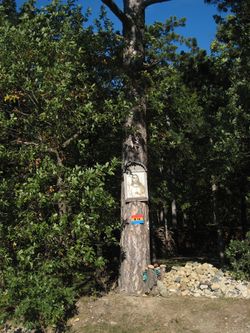 A tree shrine in general is a tree with a historical religious image (usually containing Jesus, virgin Mary or other important holy figures).

Like a wayside_shrine or a wayside_cross it can be found in many places usually alongside ways/tracks and they can help you to navigate in the general area (eg. with printed maps). It is not something temporary which will be removed soon, but stays on that tree for as long as the tree does - so in many cases +50 or even +100 years. Moreover many commercial maps include this tag as well and distinguish a tree shrine from a wayside shrine and from a wayside cross.

The tree shrine is may also known to some as memorial tree. I have chosen "tree_shrine", because it's very similar to wayside_shrine (so it's easy to keep it in mind). The german word for it is "Bildbaum" (see the image search on google). The wayside_shrine ("Bildstock" in german) for comparison.
An important note: The tree shrine has nothing to do with a memorial tree which was planted in memory of somebody - that's another reason why I decided to go with tree_shrine. However I have to note that the "Bildbaum" is translated with "memorial tree" on my commercial map, which I did not use since many wayside crosses/wayside shrines/tree shrines were not build in memory of somebody and I did not want that to be mistaken. However, I don't have invented the name myself, but searched on google for terms on pages which offer translations that could be used. I eg. disapproved translations like "wayside tree shrine", "tree with an image" or "image tree".

I have no exact number of how many of them are around, but I guess that there are thousands of them in Austria and Germany and probably in many other countries as well. According to the taginfo page there are 85 of them tagged so far and I assume numbers will rise if this becomes a proposed tag.

The tree shrine would either be invisible on the map or visible as little b&w symbol the highest two zoom steps. The map symbol could be something like you can see here. The top symbol would be for tree shrines on broad leaved trees and the second one for conifer trees. The original file where the screenshot was taken from can be found on page 13 here: [1] ( file blocked by spamfilter, remove the "(" and ")" ). Note that this symbol is a common symbol on many maps - and therefore easy to recognise.

The tree shrine would be included via a single node. Since it's something very small, ways and areas should not be used.

The required tagging would be historic=tree_shrine. Possible combinations are with religion=*, natural=tree and leaf_type=broad_leaved/needleleaved (Maybe also a comment with the included content and/or the name, if there is any).
As far as I know (and have found on the interent) a cross on a tree is not a tree shrine.

Speaking in general a wayside_shrine is something masoned from the base size of ~1/2 m² to ~4-5m² (like a shrinked down chapel). A tree shrine varies from a simple image to more artistic tings like small 3D figures which were attached to a tree. A wayside_shrine sometimes, but not always has a picture or a 3D sculpture mounted on or inside them. A tree shrine always has a picture or a 3D sculpture. (See the gallery section of Tag:historic=tree_shrine for examples). A wayside shrine is free-standing on and has nothing to do with a tree as such (so it's a wayside_shrine if there is a tree or not). There can't be a tree shrine without a tree. I would preserve the combination of wayside_shrine and tree for something like this: 1, 2, 3 - so an actual combination of a tree and a wayside_shrine together.
I recently saw that there is a tag called "wayside_chapel" which is not described anywhere as such, but is used over 750 times! But what is the difference between a wayside_shrine and a wayside_chapel? That would be another important question, but which should not be discussed here
I also thought about creating a new key "wayside_shrine:type" with tags shrine, cross, tree_shrine and so on, but I would rather have a new tag than a whole new key with different tags.

In July 2014 fkv added a request to the mailing list (topic "tree shrines") asking "native English speakers" for english words for "cross at a tree", "a picture of a saint, or other shrine-like object, at a tree" and if "the term "tree shrine" [is] common?" Furthermore if ""tree shrine" is the correct term [...] some further questions arise:" "Does it apply to crosses as well, or only to pictures and alike?", "Is name=* the name of the tree or the name of the shrine/picture/cross?", "Is start_date the birthdate of the tree or the date the shrine was made?" In my opinion these questions have to be asked anyway no matter wayside_shrine + tree or tree_shrine alone is used so that can't be pulled into consideration.
To his questions there was only one answer just on that point: "In the US, most of these sort of things are markers where people died in accidents. Wikipedia calls them "roadside memorials" [...], and I guess that might be the most common term in the US. [...] "Shrine", to my ears, has a different, more specifically religious connotation than these memorials" and another one with a different content "this is consistent with my area as well, where these features are called "descansos" (a Spanish word) and usually take the form of crosses in the freeway median/shoulder. The use of descanso is probably unusual in the non-Southwestern US, so I would concer with "roadside_memorial" as a tag for these." In the end fkv wrote "I wanted to know if there's a common term in English for shrines mounted at trees, and if this term is "tree shrine". Concluding this thread, it is not." Somewhat unsatisfying to imply that with 6 people who aswered to his call and only one of them gave a direct answer to the question. Considering the answers wayside_shrine, wayside_cross, wayside_chapel and tree_shrine should be merged into "roadside_memorial". The even more unsatisfying thing for me was "Shrines seem so uncommon in English speaking countries that there couldn't volve a fine-grained terminology respecting the mounting point. Therefore, I just changed the wiki accordingly." So just because there is no destinct sub class for different forms of shrines in english does mean that they can/should not be differed in any other country.

Why the text on Historical_Objects/Map_Properties#Bildstock says that a wayside shrine can be tagged as wayside_shrine and as tree_shrine is something I can not aswer. User Lutz should be able to answer this since he is the one who added it.