What is this all about

This is what the Garmin format map looks like after building it using the solution #1; for a close-up, see the image below

Detail of what the Garmin format map looks like after building it using the solution #1; image shows the Danube at Turnu Severin, with data that extends over the Romanian border; OSM data however is present on the Romanian side only

Same area with CLC data instead of OSM land use 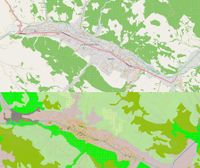 And a closeup comparison; display at full resolution to see the details 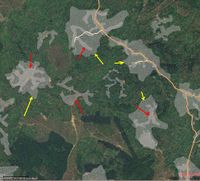 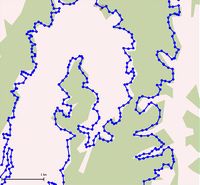 This page discusses various options for importing large amounts of data from the Corine Land Cover project. Several tests have been performed, resulting in a valid map in Garmin IMG format (using splitmap and mkgmap).

Corine Land Cover data is in the public domain, but express permission has been granted for this import; read here about this. Also, other mapping communities, most notably in France have been importing this data from the same source.

The Corine Land Cover project (CLC for short), provides, free of charge and with no licensing restrictions data about land cover in ESRI shapefile format for the whole European Union. Simply put, there is a huge bunch of tagged poligons that cover the entire surface of the EU. Polygons are split into categories, about 45 of them; almost all are present inside the Romania border contour.

The ESRI shapefiles have been processed using a ogr2ogr for a coordinate translation, then using a custom processing utility written in C++. The processing utility uses a country contour polygon, optionally expanded to cover the area just 'ouside' the territory. An intersection is then computed for all CLC polygons, resulting in a polygon set that covers 100% the given territory.

The main issue at hand is about existing landcover polygons in the OSM database that users have worked hard on to contribute. However, some data, even if very well detailed, covers some small perimeter clipped like in the sample image, which will be hard to correlate with CLC data. Other areas, like Sighisoara surroundings have forest areas that almost match CLC data.

Using a december planet extract for Romania, the following data has been computed; as more up to date and verified counts will be computed, they will be listed here.

Deletion of all existing land cover polygons in the OSM database, and replacing them with CLC data

(see comment below by Strainu ) Re-tagging of all existing land cover polygons in the OSM database, making them invisible, and adding CLC data as visible items

Full import of all CLC data, even if it overlaps with existing land cover polygons

Selective import of CLC data, ruling out polygons that overlap with existing data

Write your votes and opinions here

Based on the very few feedback on this page and romanian talk list, the accepted solution is "Solution #1 improved". More information about import stages can be found here : Corine Land Cover Romania 2006

The import finished on December 7th 2010. A number of manual adjustments still have to be made. Please see Corine Land Cover for Romania aftermath for more details