After OSMit 2009 the Italian Community decided to hold the national meeting in Genoa supported by DICAT - Dipartimento di Ingegneria delle Costruzioni, dell’Ambiente e del Territorio of the University of Genoa.

So we'd like to have the pleasure to hold SOTM 2010 in the same place and at the same time of OSM national meeting, here in Genoa. 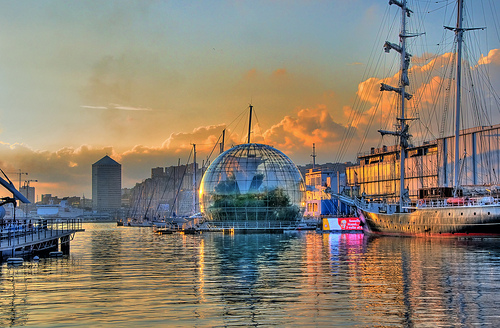 picture by edellepi on flickr under CC BY-NC-SA 2.0 licence.

The meeting will be host in one of the DICAT buildings.

Italian OSM Community and DICAT will collaborate in order to organize an interesting and exciting event!!

Probably the conveners should pay between 50 and 100 euro for two days, including the conference, coffee and lunch, even if we hope to lower such prize depending on the financial effort of public agencies and private structures in the event organization.

Highlights of the program

The conference will be focused on validation of data generated by the OSM Project, as well as the creation of metadata to improve quality and usability; parallel sessions are planned on specific topics. Special tracks:

(for more details see the link inside the bid!)

Information about the city

Genoa is a city in the north west of Italy, on Mediterranean sea, it is the best example of entirely preserved Medieval town in Europe!

To know something more look at wikipedia: Genoa!

How to reach Genoa

Airport: The airport is close to the city center, well connected by bus. In about two hours, you can reach by train, bus or car the airports of Milan, Pisa and Nice (France).

The main international connections of Genoa airport are with London (Stansted with RyanAir, Gatwick with British Airways), Madrid (with Iberia), Monaco (with Lufthansa) and Paris (with Air France). (http://www.airport.genova.it/v2/index.php?option=com_content&view=article&id=174&Itemid=162) Hence people from USA, Brazil and Japan are suggested to flight directly to Genoa passing through such major international airport. Otherwise, Pisa (http://www.pisa-airport.com/index.php?lang=_en airport) is an international hub for low-cost traveling and is reachable from Genoa in 1,5 hours by car and in 2,5 hours by train. Milan and Nice (http://www.nice.aeroport.fr/?l=2) airport are a little more far from Genoa.

Ferry-boat: from several harbour of the Mediterranean Sea you may travel by boat to Genoa; for example: Barcelona (Spain), Bastia (Corsica, France), Tanger (Morocco), Tunis (Tunisia), Valletta (Malta) and harbours on Sicily and Sardinia.