State Of The Map 2010/Getting there 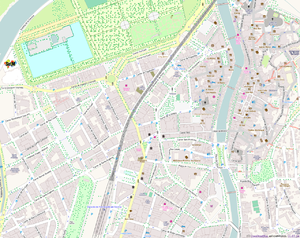 Girona with conference centre in the top left

Girona is in northeastern Spain, between Barcelona and the French border.

The State of the Map will be held in the Girona Conference Centre (map).

In order to get there, there are two major routes to get to Girona.

The Girona airport is frequently used by some low-cost companies, so if you live in Europe, chances are you could get a cheap flight. Take a look at the list of companies operating from Girona Airport

At the airport, take the shuttle bus to the city centre (around 25 minutes and 2.5€)

To get from the airport to Girona you have two options: train or coach.

Alternatively, you may take a coach from "AEROPUERTO DEL PRAT" to "GERONA". This will take you in about 1h45m from the airport to Girona.

The international train via France has also a stop in Girona.

The State of the Map conference 2010