To specify: I think, that mountain ranges can be mapped as way, along the highest ridges. (Custom) rendering should draw the name along this line, as topographic maps already do.

Following a post in the German Forum, mountain ranges should be tagged as a polygon/relation and mountains inside are part of the relation.

What is the difference of:

How to draw a ridge? - If it is broad, where we draw the "line"? Or is it better to draw a hight curve?

If we have a crest/arete, we need the opposite...

How a valley-line could be draw? If there is a river it is clear. Also a gorge, you can see it in the DOP. But if there is no river? and if it is more flat?

How a valley-line could be rendered? Showing the opposite of a ridge... 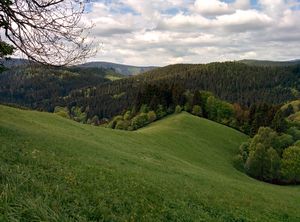 This is not a peak, it's more like a sidearm. I won't consider it a subpeak either because it is not a local maximum next to the summit but in the Harz Mountains they have names. Most of them have names ending on ~kopf (head). Their names are used to describe the vicinity so they should be mapped. I dont know how that is called in english so what could be an appropriate tag for that? It might also be a good idea to describe to which moutain (peak) it belongs.