The suffix both_ways seem to be misleading. Especially in the US *:both_ways is misused instead of *:forward and *:backward with identical tag value.

The proposal seems to redefine the meaning of these suffices to single direction lines, but this is not clearly defined. The usage in database seem to be varying. - Slhh (talk) 01:39, 12 June 2016 (UTC)

Traffic signs are direction dependent, therefore, the properties of lanes for both directions are likely direction dependent. In case *:forward is restricting the meaning to lanes running in forward direction only, it is not compatible to using *:both_ways:forward. - Slhh (talk) 01:39, 12 June 2016 (UTC)

Using both_ways within a junction 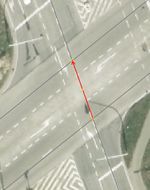 The left turn lanes might look like a shared lane for both directions at a glance, but this is functionally wrong. In fact both left turn lanes can be used simultaneously because they turn out before the other one is reached. (Slhh)

Shouldn't there be a distinction between :reversible and :both_ways? Semantically there is an important distinction, namely that lanes:both_ways means that the lane(s) can be used by traffic in both directions at the same time (hence the term "suicide lane"), whereas reversible lanes can only be used by traffic in one direction at a time. lanes:reversible seems to already be in use for such situations, so I suggest the statement "This suffix could be useful e.g. together with reversible, median or centre turn lanes." be edited to remove reversible lanes, and perhaps state the distinction.

One such case is NW 199th Street and the expressway exit in Miami, where lanes are used interchangeably for routing high volumes of traffic to and from the stadium: 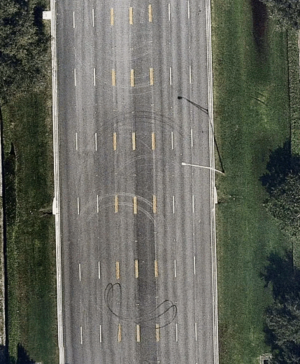