BT747 software is called the "Swiss Army Knife" for MTK loggers and it is available on most computing platforms. The software is used to manage devices based on the MTK chip set. It will download track information from most devices. It can target KML, GPX, KMZ, and several other widely used formats. The source data can be the downloaded log data, as well as NMEA, CSV or GPX.

On the mobile phone (using J2ME), you can log special waypoints on the MTK-based logger. This is possible through the PDA version, too.

BT747 also features a command line interface. It can be used to script conversion and/or tagging operations.

Finally, BT747 can be used to perform GPS Tracking. BT747 will update a Web service with the current position of the GPS. That is possible from mobile phones, desktop computers, and netbook computers.

The desktop version allows downloading and converting the log, including configuring most of the device's options.

BT747 uses OSM data as the background to show the tracks. The map data can be cached to disk for performance and off-line access to previously viewed map data.

Check out the "GPX for OSM" format, which is optimised for OSM (limited size while maintaining waypoints). Direct upload to OSM is now implemented in the 2.X.* version of BT747 ("OSMUp" button). 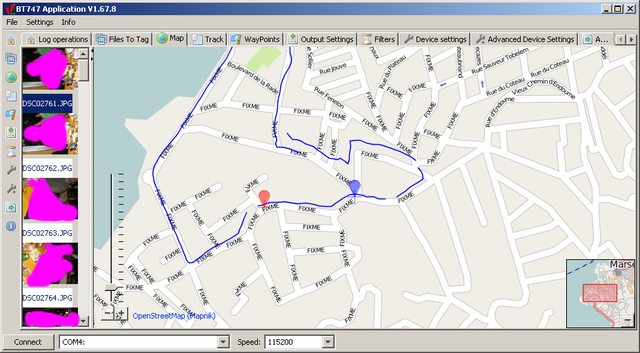 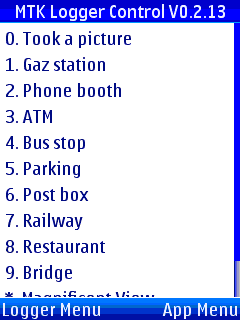 While the mobile version is still under development, the current implementation offers critical functionality to the end user such as log download, log conversion and logger configuration.

An interesting new usage of the application is the possibility to log special waypoints on the logger as shown on the screen capture on the right. Pressing "3" on your phone will instruct the MTK based logger to record a special waypoint to indicate that there is an ATM on that location.

Then, using whatever version of BT747 (PDA, Desktop, or J2ME), these can then be made available in the output file. The sample uploaded to Google Maps illustrates this. The waypoints you see on the map were logged in the manner described earlier and were converted to KML by BT747. It is possible to make over 130 000 waypoint types available.

Using a compatible Personal Digital Assistant (PDA) is ideal to configure your logger on the road, but mostly convenient to back up a copy of your log on the road and/or empty your device's log to extend logging when travelling.

BT747 is compatible with Windows Mobile and Palm systems.