State of the map

Relatively little mapping has been done in Burundi by now, mainly because of missing aerial imagery of the great part of the country and lack of local contributors. Lately there has been registered great progress in mapping of Bujumbura, partly due to the EUROSHA project, which has been running there since October.

HOT is conducting a mapping project in Burundi since mid-October 2012 as part of the EUROSHA project together with France Volontaire. The initial focus is on baseline mapping of Bujumbura and the regions in which the needs are most crucial. All these activities are meant to support the growth of a local OSM group in Burundi and the growth of the OSM project. 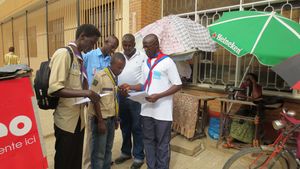 What we are working on

Using satellite imagery and field surveys, the international team of EUROSHA volunteers is trying to improve the map of Bujumbura, which is not really complete for now. Although we do our best to make some progress at this point, this task remains unfinished due to other activities.

Aerial Imagery can be a very useful tool in mapping. However, all data derived from aerial imagery should be verified in the field. Great care should be taken, that aerial images are aligned properly with the coordinate system in OSM. The best way is to align the images with ways in OSM that are derived from or verified by GPS survey in the field. It would be very helpful when the source of the data is easily identified, for instance by using [source=GPS] or [source=Yahoo] etc.

Currently, there is a project called Better maps for Burundi run by Japan International Cooperation Agency (JICA) which consists in the creation of the new aerial imagery of Burundi.

Bing coverage for Burundi is available in high resolution in area of Bujumbura Marie, Bujumbura Rural and Gitega. The imagery comes from 2010.