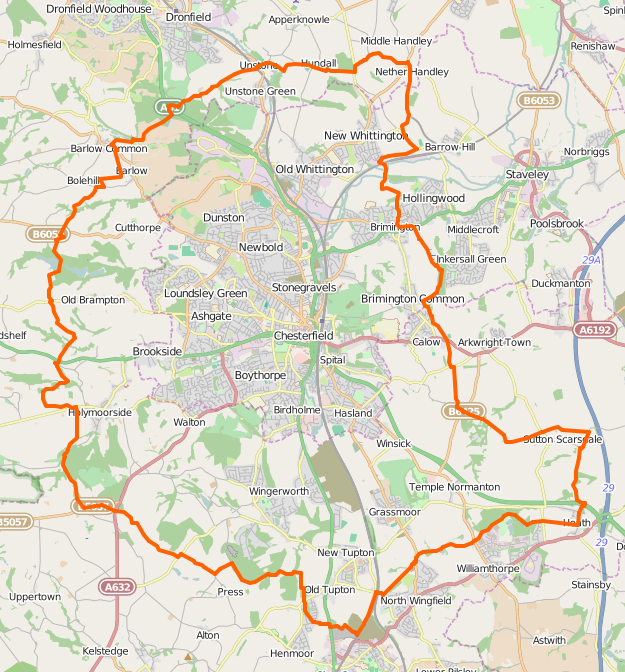 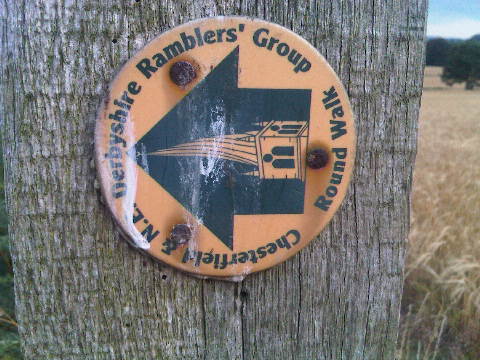 The Chesterfield Round Walk is a circular walk which runs for 34 miles around Chesterfield. It includes footpaths through fields, farm tracks and former railway tracks. The path is marked with 260 or so individual waymarks or directions added to existing signposts. The waymark is a yellow crooked spire (the symbol of Chesterfield) on a green arrow on a yellow background. A number of information boards exist around the route and provide more information. The level of waymarking varies from the excessive (every few tens of metres in some cases) to the ineffective (some important turns aren't marked at all).
The route was pioneered by members of Chesterfield & NE Derbyshire Ramblers’ Group, co-ordinated by Footpath Secretary, Dennis Ransby.
It passes points of particular interest such as the Barrow Hill Roundhouse Railway Centre, the Chesterfield Canal, Sutton Scarsdale Hall, the Five Pits Trail, and the Stone Edge Chimney.


The whole route is walked in May each year as part of the Chesterfield Area Walking Festival. The 10th anniversary walk took place in 2015, starting and finishing at the White Hart, Calow with a short noon celebration at the Peak Edge Hotel at Stone Edge, attended by the Mayor of Chesterfield and Chair of NE Derbyshire District Council.

The whole path has been walked, added to OSM and added to relation 68834

68834 - where individual members can be viewed. The relation has been added clockwise from the Wolfie Pond, near North Wingfield.

Three GPXs containing the walked sections signposts have been uploaded with tag "Chesterfield_Round_Walk". One covers the whole path, one the eastern side and one the western. The separate eastern and western sections have been added because with over 250 waypoints there are more in one route than can fit onto some handheld GPSes.

Each waypoint description contains the rough direction that the sign points (e.g. "NE" for "signs point both North and East"), followed by an exclamation mark if the sign is actually pointing the wrong way. The file also contains waypoints for places where there should be signposts, but aren't.