CityMaps2Go (http://www.ulmon.com/#get-the-app ) is an iPhone and Android app for travel and navigation, developed by Ulmon. OSM data is packaged into City Maps, which can be downloaded to the device, and used completely offline. There are over 7,500 City Maps available for download from within City Maps 2Go to provide a worldwide coverage. It is unique in the way, that it allows unlimited downloads for free on iOS and Android. In addition to that, it's possible to create lists in order to organize, plan and save great places on iOS. There is also 'Discover' on iOS to provide personal travel inspirations in the form of stories, which are sent to the user. In-depth travel content as well as tips and recommendations are available at any time. The latest update to Version 8.2 introduced the new feature 'Sharing' for iOS. 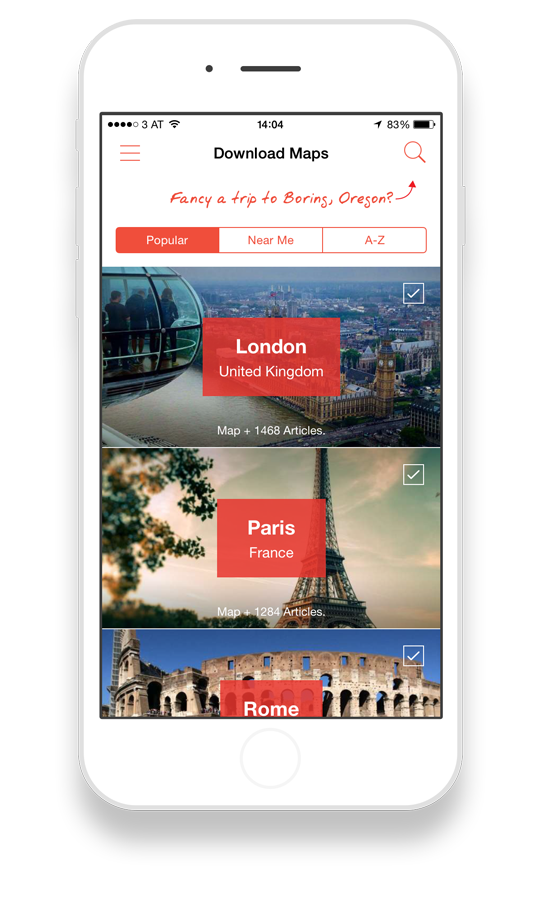 Appointed as one of 'Austria's Born Global Champion' in 2015. Apple, also has showed CityMaps2Go in its "Rewind 2010" feature as the second most sold app in the navigation category in Germany and Austria in 2010. It is also the offline map app with the highest appstore rating.

Version 8.0 for iOS, launched in May 2015, introduced 'Multifunctional Lists' to organize, plan and save great places.

Version 7.0 for IOS, launched in December 2014, introduced 'Discover' to provide personal travel inspirations in the form of stories, which are sent to the user. In-depth travel content as well as tips and recommendations right at your fingertips.

2010, Apple, in its "Rewind 2010" feature, announced City Maps 2Go the second most sold navigation app for iPhone in Germany, Austria and Switzerland in 2010.

2011, as part of the "Best App Ever 2011" contest, the user community voted City Maps 2Go the best Navigation App for iOS.