City of Basel Suburb Import is an on-time manual import of data provided by the local authorities, covering the city of Basel in Switzerland. The import took place on December 29th/30th, 2017.

The goal is to import suburb boundaries, which do not exist yet in OpenStreetMap at all (except for the city Basel itself).

The import of the 19 boundaries will take place in the last quarter of 2017.

Data is provided by the authorities of the Canton Basel-Stadt (a Swiss "state", actually the smallest one, only 37km²). 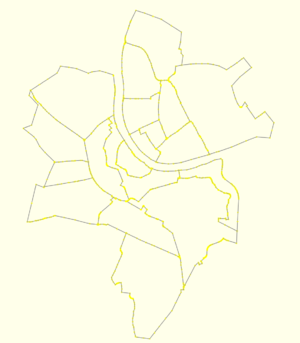 The processed data, ready to be uploaded:

This is a one-time import. The boundaries are not expected to change in decades.

The following tags will be used for each relation representing a boundary:

Every relation also has a label node having place=suburb and the same name/wikipedia/wikidata tags.

Every changeset will be tagged with the source="Geodaten Kanton Basel-Stadt" and description=https://wiki.openstreetmap.org/wiki/City_of_Basel_Suburb_Import.

We will not import the neighborhoods ("Wohnbezirke"), as some of their names are not familiar to the general public, but seem to exist for administrative statistical purposes only.

The workflow is done using the JOSM editor.

Conflate the to-be imported boundaries with the existing boundary of the city, which touches three countries.