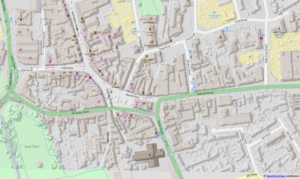 English Environment Agency LIDAR data is a new open dataset with aerial LIDAR data, giving heights of the terrain and buildings across much of England.

The Environment Agency LIDAR data was released in 2015 as an open data set (Open government licensed). The data includes both digital terrain (DTM) and digital surface (DSM) models. This directly provides elevation of the terrain from which contour lines can be computed with a range of open source software (e.g., GDAL and QGIS). In addition the heights of features such as buildings, trees and hedges can be computed from the difference between the two models. Outlines or heights of such features might be derived from the LIDAR data in order to be input as vectors into OpenStreetMap.

DSM is the scan of the surface features from the aircraft including buildings, hedges, trees and even cars. The DTM data are processed version of DSM to remove the objects on the land, such as buildings etc, to reveal the underlying terrain.

Data are available at resolutions ranging from 2 metres down to 25 cm (2m, 1m, 50cm & 25cm). Around 65% of England is covered by 1m or 2m resolution data, but finer scale data is much patchier and focussed on areas most at risk of flooding.

Data is not necessarily very recent. In many areas it may be at least 5 years old. Comparison with local knowledge, Bing images and OSM data can be used to provide a rough estimate of age.

Most data tiles appear to be accurately aligned to OSGB grid boundaries. Tiles are natively in the OSGB projection (EPSG:27700). The LIDAR process means that this data does not suffer from parallax artefacts which often make aerial imagery difficult to interpret. However some 'clutter' is present, largely as obvious artefacts over water.

This data is available for England only. Release of Welsh data from Natural Resources Wales is anticipated later in 2015. Whether Scottish data will be released by SEPA is not yet known. 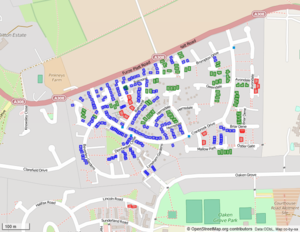 Building heights tags in the OSM DB, set based on this dataset. Shown with a colour classification

Some of the above linked experiments are potential starting points for a process of deriving data which could be input into OpenStreetMap. In particular we may be able to vectorise building outlines or (more simply) get the height of buildings suitable for height=* values.

Some data input tests so far:

Importing or manual importing may be possible on a larger scale, but would only be carried out after deriving a separate data file, and probing the quality of this first.