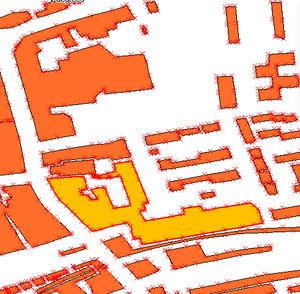 Vectorisation Software is software which caries out "The process of converting pixel-based images into vector data models" in an automated way. It's like OCR (Optical Character Recognition) but for maps.

Maps can be generated from either vector or raster data, and both can be useful, though for many purposes vector-based images are more flexible and easy to use, particularly for "Geographical Information Systems". To take a simple example, suppose you want to point to a position on a map and have the computer tell you which streams and rivers on the map would potentially be contaminated by release of a suspect fluid dropped at this position. With a map that's just an image, this is virtually impossible; with a map where rivers, streams, and contour levels are represented by vectors with attribute data and feature codes, it can be quite easy.

Also, a vector map can be redrawn in virtually any style you want - different thicknesses and styles of lines, colours, texture fills, and so on.

Vectorisation is the process of putting in a picture at one end and getting "intelligent" information out of the other end; having a computer program recognise where the lines are, WHAT they are, and putting the information into a structured file or database in the form of vectors (lines defined as strings of coordinate pairs), feature codes (a code saying that this line is a road, this a contour, this a river, and so on), and attribute data (e.g. contour height).

Computer programs that do vectorisation do exist. Unfortunately, those which are generally available don't do a very good job for our purposes. Either they are general-purpose, more intended for handling illustrations, or they are proprietary, and are very expensive. In most cases they seem to provide fairly unsatisfactory results for mapping, or require a lot of manual input, or both. However we do have...

Scanaerial It is used instead of the obsolete:

JOSM/Plugins/Tracer is for tracing buildings from cadastral (ie. line-art) maps.

Any other software with vectorisation capabilities? Add them here.

We have some pretty good Ordnance Survey maps in raster form because they're old Out-of-copyright_maps. Vectorisation used to be an interesting possibility for "liberating" the O.S. maps, since all vector data sets from the O.S. were crown copyrighted. That's now changed, but it could still be interesting to vectorise the old maps. We're doing this manually when we trace over them of course.

User:TomChance/VectorisingStreetView - Tom Chance's write up of the process of vectorising buildings from OS StreetView.

User:Michaelcalder gave a talk at State Of The Map 2007 (audio recording) about his work on vectorisation software to tackle this. His organisation was called "Geographica Kernow". No sign of them these days.