Ordnance Survey (website, Wikipedia) is the national mapping agency for Great Britain (the United Kingdom excluding Northern Ireland). Although other organisations have mapped Great Britain, the Ordnance Survey has the most detailed maps, and many organisations license the O.S. data products for use elsewhere. This includes Google Maps coverage of the UK for example (licensed via Teleatlas).

There is a great deal of national pride in Ordnance Survey, which has been producing beautiful maps for over a century. The landranger series of walking maps are particularly popular. Originally this was a government (Crown) organisation funded and owned by the taxpayer, these days it operates a "trading fund" which must fund itself like a profit-making business. Hence the license … 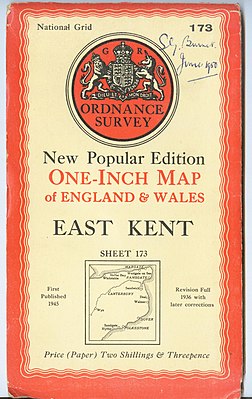 Front cover of a one-inch to the mile New Popular Edition, from 1945

In the past, all OS maps were covered by Crown copyright and the OS set a precedent for enforcing extremely strict interpretation of 'derived works'. This, coupled with very high licence fees, was a huge cause of frustration for many people and gave rise to the OpenStreetMap project! (see History of OpenStreetMap)

The OS provide UK public bodies (councils, etc.) free access to maps and data via the Public Sector Mapping Agreement (PSMA) and One Scotland Mapping Agreement (OSMA). Data produced by a PSMA member using an OS map may be shared with other PSMA members. 'Produced' means tracing features on an Ordnance Survey basemap or positioning a feature to align with features on a basemap. It can be made full Open Data by applying to the OS for an exemption, after which it can be shared under the Open Government Licence and then is usable within OSM (ref required).

Data that is 'independently sourced', i.e. data (including descriptive information or attribution) created by means of an independent survey), is not claimed by OS as their intellectual property, even if it is provided overlaid onto an Ordnance Survey basemap. This can be confusing as there is a requirement to display an OS copyright statement. In this case, OS copyright applies only to the basemap and not to the information overlaid.

If you create data (including descriptive information or attribution) by means of an independent survey which can be used independently, we can't claim any ownership in your data. It is not, therefore, subject to any of our licensing terms. If you create data as described above, which is then overlaid onto OS licensed data for the purpose of verification, OS doesn't claim any ownership of that data - unless your features are repositioned as a result. If you reposition a feature, then our IPR [intellectual property rights] will be present in it as you have now created derived data. In these circumstances the data will be subject to the licensing terms applicable to the OS source data used. If additional independently-sourced descriptive information or attribution is attached to OS licensed data, we don't claim any ownership of that additional information. The additional attribution is not, therefore, subject to any OS licensing terms.[1]

OSM takes great care not to taint the database with intellectual property rights belonging to outside parties.

Ordnance Survey became a central target of open data campaigning in recent years. This pressure, and the pressure of emerging competition exerted by OpenStreetMap (as well as other neo-geo technologies such as Google Maps) has forced the government to hold an Ordnance Survey Consultation in 2010 and to open up some of their data. We helped make this happen!

Some old OS maps have fallen out of copyright. As such there are absolutely no restrictions / attribution requirements. They are all raster maps (scanned images) which we can trace.