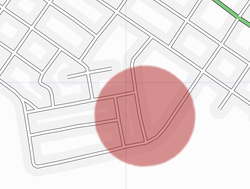 Traces were collected in three driving sessions over two weeks. In each case traces were collected simultaneously on two independent devices. A NaviGPS was mounted inside the front windscreen. A Holux GM-210 was mounted on the rear roof of the car and fed a laptop running GPSDrive. Traces from these sessions were uniformly good with the exception of the dead zone highlighted on the maps below. 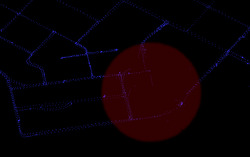 The NaviGPS traces were discontinuous in the area of interest. Often the trace departed from the path of the vehicle before becoming discontinuous. Stray data points can also be seen. 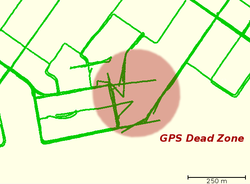 The GPSDrive traces were discontinuous as well. GPSDrive snaps the last good fix to the next good fix. The satellite level display on GPSDrive gives a hint what happened in the area of interest. While overall reception during these sessions was good and at times GPSDrive reported 12 of 12 (!) satellites. But reception decreased when approaching the dead zone.

Normal operation of the satellite level display shows several vertical bars with differing maximum heights. When approaching the area of interest this maximum level reduced until no satellite showed a signal higher than a few pixels on the display. On closer approach the signal from all satellites disappeared and signal lock was lost. The signal was not regained until the distance from the area of interest increased.