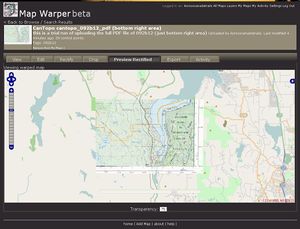 Warping a map image with the Map Warper

Geothings Map Warper (mapwarper.net) (previous version was hosted at warper.geothings.net) is an open-source map-warping / geo-rectifying service, written in Ruby on Rails and lets users import maps or aerial photos and warp/rectify them to fit into openstreetmap. Geothings is MIT licenced. The project was created by Tim Waters.

This tool is used to create WMS and Tile Layers which can be used in JOSM for tracing maps (that you have the permission to use).

Note that there is a newer version of this project at Mapwarper.net with no limits on image size or dimensions.