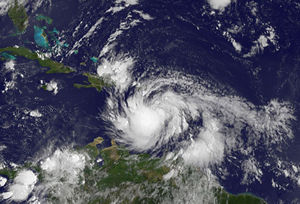 This visible image of Tropical Storm Isaac was captured by NOAA's GOES-13 satellite on Aug. 23 at 7:45 a.m. EDT as it was lashing the eastern Caribbean. Credit: NASA/NOAA GOES Project

Came accross this serious hurricane warning on August 23 from NOAA, informing that the tropical storm Isaac may hit Haiti severely from the next 24-36 hours.

We think it is worthy to take Isaac seriously and so we are starting a local preparation coordinated by Jaakko Helleranta and Brian Wolford. They have been living in Haiti for almost two years and have carried out many OSM activities and participated to HOT programs there.

Brian and Jaako have started to:

Nicolas and Severin are introducing them to the key humanitarian and government actors in Haiti to ensure that any OSM response effort will be articulated to the wider response plans and efforts.

External notification to partners about preparation has been done on August 23, encompassing:

If we are lucky, this will just be a good simulation exercise and a way to check who we can count on amongst the local mappers, the humanitarian actors, and the government. In the course of the day, the forecast shall get more focused and our action plan refined.

We look primarily at defining the Areas Of Interest (AOIs) and the nature of the needs like transportation, camps, temporary shelters, WASH (Water, Sanitation and Hygiene)

Some remote help would be needed (imagery set-up, mapping...) and Jaakko and Brian will keep the team posted as the situation evolves.

For now, anyone can already partipate by contributing to the remapping effort using these 2 Tasking Manager jobs:

HOT can also harness the data preparedness work it has been conducted around the haitidata.org platform within the context of the wider World Bank OpenData Resilience Initiative OpenDRI.

Haitidata.org allows for sharing valuable knowledge (reports) as well as vector and raster data for DRR and IM/GIS experts in the Island which articulates well with the UN OCHA Core Operational Datasets and complements the OSM database. More information is coming on this.

V&TCs focusing on data mining and GIS analysis can also make the most of the data available on haitidata.org. Indeed, it hosts the data layers from the Analysis of Multiple Natural Hazards in Haiti (NATHAT), a multiple-hazard assessment led by the World Bank in March 2010 and October 2011. It includes in particular, elevation data (up to 1m resolution from LIDAR capture), faults or liquefaction incidents, but also sliding or flood models.

For more information about the NATHAT project and methodology, see:

OCHA, through its Humanitarian Response website, provides a Common and Fundamental Operational Datasets Registry from various institutions, including the Haitian National Center for Geo-Spatial Information (CNIGS)

The haitidata.org platform, within the context of the wider World Bank OpenData Resilience Initiative OpenDRI, provides both baseline and derived multi-thematic data (vector and raster) for DRR and IM/GIS experts.