How do you map in/Russia

How do you map in/Russia - Other languages

This is a tough question here, in Novosibirsk, where almost all PC users know 2gis, the desktop city map/yellow pages with a huge business database and public transport routing. It's free to get and to list your business (advertizing and labels in the map are for charge), but completely closed source, both data and the software. You need to download 2 installers: 1 for the program, and 1 with the DB of your city. (Or more if you need other cities.) You can't fix bugs. You can load only a small part of data like in Google Earth, just 40 megs of the whole city. You can't zoom out of a city and zoom into another one: instead you click the (installed) cities dropdown and the program launches another instance of itself. This model was invented in 1998 and is pretty outdated, but all together still manages to satisfy the users. I have never tried their mobile versions, but there, the concept is the same. The company is trying to get to the web, with reasonable success. In 2009 they launched a new online version based on OpenLayers.

So, Novosibirsk is their native city. Everyone knows 2gis. When someone needs to go somewhere, they open 2gis and search the address.

I find few areas and people who could be interested in using and contributing to OSM. It's a tough question. That's why last several months I have been drawing rural areas and small towns, the places in which 2gis will never be interested, or will have not enough resources to map.

In my opinion, to make the map compelling to an average man, here are the necessary features:

1. Routing. Could OSM use CloudMade routing on its main page?

2. Tape measure tool. This is soooo useful! Once you get used to it, the maps without it seem lame.

3. Clicking on buildings and streets and seeing some meaningful info. ...And being able to edit it. This can be done in JavaScript, no Flash-based Potlatch is required, and I think this can be enough for 90% of users, who contribute just tags.

5. Hybrid layer, like everyone else has. Some places are mapped worse than others, and it's annoying to see there's nothing and need to open another online maps service. A hybrid layer could stop users from going away.

6. User's POI/vector layers. We have them in OpenLayers already, don't we?

First, I want to describe the sources available here, in Novosibirsk region, and their quality:

1.Bing hires images. Mostly great quality. Unfortunately, Bing hi-res images are too scattered: among the 30 district main towns, they cover only 6. It's quite similar to what Google provides us with: the nearby Kazakhstan is covered completely with hi-res imagery. Just beyond the country border, hi-res coverage is scattered. The only reason I assume is that we have too strong domestic websites (like search engines and social networks), hence Google has a small market share, not to mention Bing, and does not care much about our country.

2. Scanex, a Russian GIS company, opened free mid-resolution images to OSM community. They cover the western part of the country, Urals regions (see the last link), but end just at the western border of my region, showing only some minor villages. With this resolution, one can map a bit better than with GPS traces. I managed to draw some minor roads and lakes with them.

3. Public landuse registry. It shows the contours of land lots and their addresses. We use it to get street names and house numbers mostly. In places where no hi-res imagery is available, one can sketch some roads, since by the gaps between land lots, it's visible where they can be. The result is not detailed, but again, you can name the streets, which is useful, and from my observations from this point local users decide it's worth to contribute and start adding some details.

4. Yandex Panorams service (Analog to Google Street View). Recently they officially allowed OSM contributors to use them to get some data corrections, like checking if there are sidewalks, check the number of levels in buildings and so on. 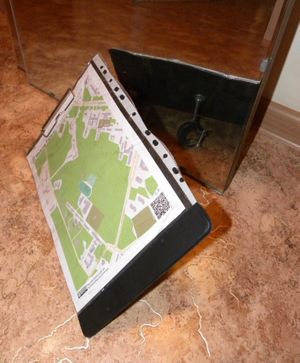 A rotating map holder for MTB orienteering, with WP attached

5. Walking Papers. I used a rotating map holder with it, the one I use in MTB orienteering races. Worked perfectly, except that I had to rotate it to read the signs too.

6. GPS traces. I recently do not need these, but many people do. I've read that some taxi services imported their traces to OSM. I asked the local cyclists to give me their traces, got about a hundred tracks and used them to draw dirt roads in the countryside.

Mattias asks if we use GLONASS. No, I haven't seen any such device in real life, nor heard of any GLONASS trace in OSM.

I tried riding a bike with a smartphone, but the result trace was of low quality, the points drifted from the real places way too much to make any sence, and since then I map only from the imagery and don't ride for traces, and rarely make photos for OSM: I decided that riding a bike is for speed, excercise and nice sights.

7. The state places registry and address registry. There is a simple DB of villages with names and co-ordinates. There are websites that, on a daily basis, check how many of the region villages or streets are already mapped.

One may ask: you Russians launched the first man into space and have rockets launched often and also must have satellites, is there any domestic imagery in Russia?

The sad truth is that, first, the imagery satellites development became, lets say, stagnant since the end of USSR. Secondly, Russian space agency was not obliged by law, like NASA, to make all its data public domain. They want to keep their hands on the data for copyright, security and secrecy reasons, and to charge a lot for the privilege of using it. Needless to say, the money flow in the market goes around them.

Apart from fixing the minor details around my home, I mostly draw towns and villages. I first draw the roads, lakes (there are a lot of them, and they can be a good landmarks to orienter in the field), then landuse, then the buildings and street names.

I prefer to map towns over woods and fields, because it will be usefil to more real world users. Though, there is a guy who maps only woods and fields in my region. Also I've seen a guy who was obsessed with industrial areas: he mapped factories with all the buildings in the territories, fences and all the minor railroads. Once I've seen him commit a changeset with 6000+ nodes, in an area of a dozen of sq.km. Unfortunately, he's not editing here since October 2010.

Since Komяpa introduced his 3d map, many of us in Russian OSM community became obsessed with building levels. In some places all the buildings have their heights or levels tagged.

Here's the website many Russian OSM users check daily: osm.sbin.ru/stat (mirror). It shows how many edits there are in your region, how many objects you have made, and renders density maps.

Help us to improve the next issue of this series and say thanks to the authors.