This page covers some basic use cases for indoor mapping and discusses some peculiarities of each one. For each case existing example maps are included.

This document also includes examples of internal addresses. These are addresses used within a community to locate objects. In an academic building, the rooms are numbered, such as "room 324". An apartment building has the units numbered, such as "apt 125". In a retail store, a product is listed at a location such as "aisle 8 bin E shelf 4". At a stadium, a seat my be listed as "section 123 row 24 seat H". Airplanes have maps and internal addresses associated with the seats, "seat 23D". Just as postal addresses are the identifier of location in outdoor maps. These venue-specific addresses are the identifier of location on indoor maps.

Shopping centers or shopping malls can have interiors with many features of interest, often on multiple levels. shop=mall is the tag for an element encompassing the whole thing, but what about inside?

Shopping centers were the first location covered by many indoor map companies.

Shopping centers can consist of a single large building, or they can consist of multiple separate buildings. Also, the store entrances can be inside the building or facing outside the building. When maps of shopping centers are presented by the venue, they typically show the map with the indoors and outdoors combined, with each level being shown as a cross section across the multiple buildings. This is atypical of the presentation of indoor maps. Typically the indoors is shown individually for each building.

The shopping center generally consists of one or more buildings. Stores may face the internal hallway or the outside. The object of interest is a unit. Other important objects are bathrooms, stairs/escalators/elevators, open areas in the floor (we called these open obstructions) and other rooms.

The typical addresses areas within shopping malls are:

Some internal addresses associated with an airport:

Academic campuses are one of the most diverse types of venues. There will be academic buildings with classrooms, offices, and labs, dorm buildings, libraries, a student center with businesses, athletic facilities and many other facilities.

A single example academic building is given below:

The typical internal addresses associated with an academic campus are:

A train station is an example of an indoor map that is not a building.

The typical internal addresses associated with a station are:

Casinos are often very large. They typically combine a large hotel, the casino floor, shops and restaurants and theaters.

The objects of interest in a stadium map are the sections, seats, rown, bathrooms, concessions, ticket windows, will call, first aid, security.

As evidence of the fact that there is a for mapping technology applied to venues, this stadium along with many others have venue level street view to show the view from each seat.

Street View in a Venue

The typical internal addresses are:

A parking garage combines indoor automobile navigation and pedestrian navigation. A complexity in parking garages is the ramps between levels, as opposed to a distinct vertical passage. This is typically handled by cutting the ramp at some location and separating floors there. Since the cut appears at the same place on each level, there is not a problem of stacking within a single level.

The typical internal addresses associated with a business campus:

The main object of interest in an apartment building are apartments (units). It is useful to plot the parking lots and the units to help people to find a unit. It is less common to plot the inside of the units at the room level, since this is typically private. There are cases where the apartments themselves should be mapped, such as for sales or leasing purposes.

Hospitals are very large. The different use case for a hospital will require a very different map. The use case for patient navigation should be very simple just showing the sections of the hospital. Hospitals actually spend a lot of money on signage to help patients find their way. A map for hospital employees, such as to track assets, should be very detailed, shown at the room level.

The typical internal addresses associated with a hospital are:

The important areas of a retail store are sections and then aisles/fixtures. Some retail stores also have other stores inside them. There are also bathrooms, customer service, checkout.

The typical internal addresses associated with a retail store are:

A business campus will be similar to the academic campus but with less variety. A simliarly high level of detail is required. Areas of interest are offices, cubes, conference rooms.

Business campuses will typically have private maps. Although OSM may not map many businesses, the mapping model should support this use case.

The typical internal addresses associated with a business campus:

It is certainly not common or necessary in any way to map houses, but it certainly can be done. A house should be plotted at a more detailed room level. Houses often have an open plan with different rooms flowing into each other. Houses are a place that illustrates the importance of drawing walls separately from the rooms.

Cruise ships also have maps. One difference with something like a cruise ship is that it doesn't have fixed coordinates. It must by plotted in a relative coordinate system.

Objects of interest include the staterooms, restaurants and entertainment facilities.

This is a very obscure example. This is a place where peoples ashes are stored. Kind of an indoor graveyard. The building is a twisted maze of rooms, with floor to ceiling cubby holes for urns. 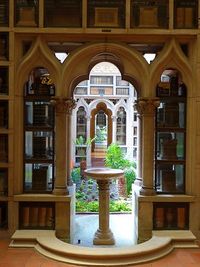