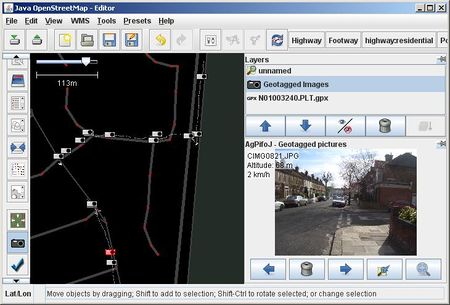 AgPifoJ plugin showing a set of photos along a GPX trace

AgPiFoj stands for Another geotag plug-in for JOSM. It was a plugin, but became the build-in photo mapping function of JOSM.

Now that AgPifoJ is a core feature, you can open images from the main menu (File > Open...) or from the right click menu of the corresponding GPX-layer. See photo mapping.

There is no longer any need to install these features as a plugin, and the AgPiFoj plugin is no longer available for download in the normal manner.

Feature of the original plugin were as follows. These features are now part of the core JOSM software

Note: For those who used the core GeoImage feature of JOSM v. 2561 and earlier: the timezone is the opposite with AgPifoJ. (It is greater than 0 when going to the east of Greenwich Meridian.)