Why using the ContourOverlappingMerge plugin? 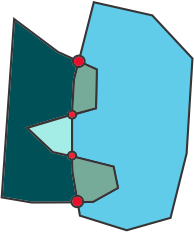 The plugin should be available in your JOSM Plugins preference window under "ContourOverlappingMerge" or you can download it from [1]. (Fix for current JOSM [2])

When have a special case, when the contours have more than one overlapping section (below, the leftmost contour is the first selected one). The hole(s) left between the two previously overlapping contours are assigned to the first contour that will then cover a larger area. This may not be expected, notably when these holes covered a large area, for example when merging a farmland area and a forest area around some residential or farmyard areas, with the modified farmland or forest now covering these residential/farmyard areas, whose borders are no longer visible completely because nodes where deleted:

Ideally the plugin should have an option to keep these holes intact (ouside the two merged polygons) by keeping all their nodes and creating additional polygons around them, so that users can selectively select which hole polygons to merge (or not) into one of the two initial contours, and then assign relevant tags to the new untagged polygons not merged.