From OpenStreetMap Wiki
Jump to navigation Jump to search
Key:name:etymology:wikidata - Other languages

There are many people and many places that share the same name, making it difficult for a data consumer to do anything intelligent with name:etymology=* besides displaying it verbatim to the end user. With name:etymology:wikidata=*, a data consumer can reliably look up the Wikidata item to enrich the user interface with tangential information about the namesake that would be out of scope for OpenStreetMap, such as the occupations or demographics of namesakes in a community. A data consumer can use the Wikidata item to automatically transliterate a street name more accurately, since sometimes two identically spelled names may be transliterated differently based on their pronunciation.

As with name:etymology=*, only use this tag if you are reasonably sure you know the specific namesake. Beware of false etymologies; don't assume you know the namesake just because you are familiar with the neighborhood.

Some features are notable enough in their own right to have their own Wikipedia articles and thus their own Wikidata items. The Wikidata QID representing the feature itself goes in wikidata=*.

Editors and data consumers may need to special-case this key and other subkeys of name=* that do not represent localized versions of the name=* key. [1] 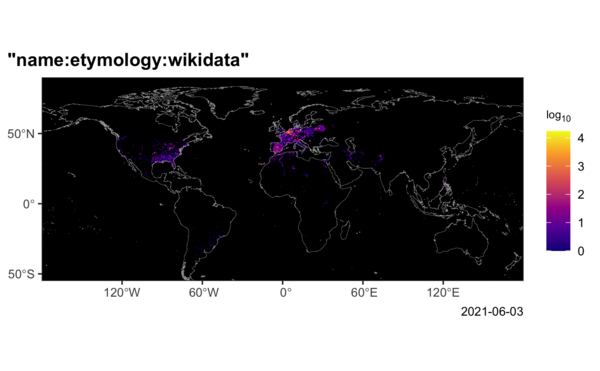