From OpenStreetMap Wiki
Jump to navigation Jump to search
Key:ref:lor - Other languages

A Line of Route (LOR) refers to a strategic rail route, and can be made up of several ELRs. For example, SBJ is the ELR for the line between Swanley and Ashford B junction. At Otford junction, the line diverges to Sevenoaks with an ELR of OJS. The line of route which covers Swanley to Sevenoaks is SO140. The LOR reference for any UK location can be found in the page heading of the Sectional Appendix line diagrams. An Engineer's Line Reference (or ELR for short) is a three or four-character code used in the British rail network to refer to a section of a track or route. These references are unique across the whole rail network, allowing identification of any part of the network. Occasionally ELRs are used to refer to other railway infrastructure such as depots [1].

The key is useful to allow found and editing the route for when Network Rail update the information about it i.e. speed limits and restrictions. 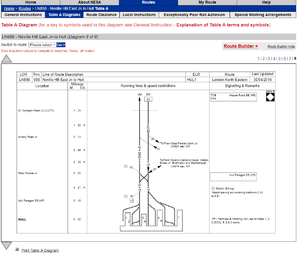 An example of a Table A diagram for Hull.
Retrieved from "https://wiki.openstreetmap.org/w/index.php?title=Key:ref:lor&oldid=1804593"
Categories:
Hidden categories: