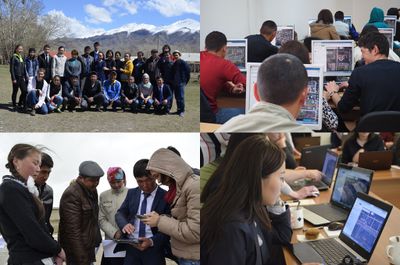 Students and teachers creating detailed maps of their villages as part of a project in 2016 in the Tien Shan mountains. read more on HOT blog

The main cities such as the capital Bishkek are partially mapped, as are main highways and parts of the mountainous rural areas, for example around Karakol.

There are missing roads that are visible in Bing around Osh and around Issyk Kul lake. Missing some roads around Jalal-Abad.

Some care has to be taken with names as some have changed and have different international spellings and transliterations.

It needs the national border imported.

Aerial imagery has been requested to UNOSAT in July 2010 and is now available for the cities of Osh and Bazar-Korgon. Due to licence reasons, the WMS URL cannot be shared publicly. Please contact Frédéric Bonifas (fredericbonifas@gmail.com) if you are interested.

All data traced from this imagery should be credited "source=UNOSAT, e-geos".

This imagery is quite old now, so no need to map temporary stuff like "SOS" written on the ground.

For better understanding of the satellite pictures we can look at photos taken in the city. There are some on flickr for exampe. - For Osh : http://www.flickr.com/map?&fLat=40.5373&fLon=72.8125&zl=5

Here is a map of Kyrgyzstan for Garmin GPS devices : http://fredericbonifas.free.fr/kyrgyzstan_20100813.img

It would be good to use QualityStreetMap to monitor the completeness.

1999 census results, as taken from the German wikipedia article Liste der Städte in Kirgisistan. Numbers in italics are 2008 estimates, taken from www.world-gazetteer.com.

Wikipedia also has a more complete list of towns and villages

Fergana Valley has its own wiki page. This is partly within Kyrgyzstan.