Leicester can be divided neatly into pie segments, based on the river, the railway, and the major roads which meet at the city centre (A6, A47, A50). 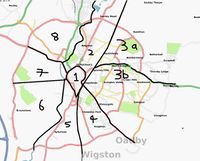 All main roads and junctions are believed to be done except:

The Soar and Soar Navigation are done. Not all weirs and locks are marked.

No other major rivers in Leicester itself, until one gets to the Wreake, but a variety of little brooks.

Nearby towns and areas