A Mapping Pub Crawl is a subset of a micro or pico mapping party, but in the format of a pub crawl, over an evening, with short 20-30 minute mapping stints.

Informality is name of the game, and yet, times should be kept to. Participants arrive to first pub via different routes, they meet and drink beer. Whilst drinking, mappers plan the next route to the next pub, so as to cover unmapped streets, and avoid doing the same roads. At designated time, they depart to the next pub, again, via different routes, to cover as much ground as possible, whilst still heading in the direction of the pub. More beer is drunk, discussion of routes, and names of streets etc, until the time for the next pub, and so on. 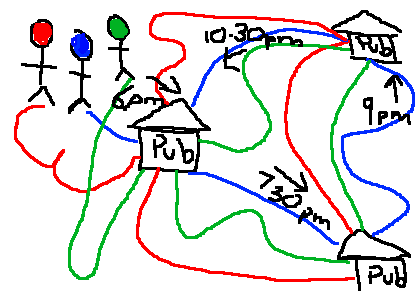 Advance notice of names of the pubs, and times to rendezvous should be published. Phone numbers should be exchanged, and a good idea as to where the next pub is located should be had. For timing, about 1 to 1 1/2 hours between each pub should be sufficient, depending on distance between. Alternatively, increase the interval as the evening progresses. An example:

Just the one documented. Know of any other attempts?