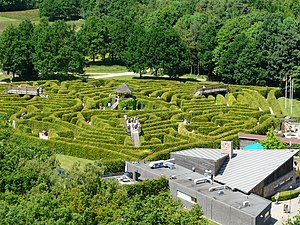 This page is to document and map mazes. These probably require aerial imagery or SIRFstar3 devices.

A maze has multiple paths that can be taken to an exit. A labyrinth only has one path, that typically spirals from the outside to the middle. Sketchplanation on the difference

Often there may be "emergency exits" that can be used to leave the maze or labyrinth without going all the way round.

The proposal for attraction=maze Proposed features/maze was not discussed but is in use.

The tag leisure=maze is also used but the tag was not formally proposed nor approved.