See https://www.mio.com/ where recent products have been focused on car and cycling navigation.

A standard car navigation unit driven by SIRFstarIII and WinCE with simple media support and Bluetooth.

As delivered, the iGo software is completely useless for mapping, since it is not possible to get the GPX files out of the device. However, if you don't mind voiding the warranty, go to http://www.gpspassion.com/forumsen/topic.asp?TOPIC_ID=61233&whichpage=1 and learn how to hack it to easily add that feature.

The P550 is a Personal Digital Assistant (PDA) that runs Windows Mobile 5. It has a built-in GPS module with the SiRFstar III chip set. It is possible to attach an external antenna. The device also features Bluetooth and WLAN. A car mount is included in the package. The device can be bought with or without maps and navigation software from MIO. A few of the devices sold before August 2006 had a problem with weak signal level, but the problem has been acknowledged by Mio in the meantime. Questions about the device can be asked of user eriso.

The main problem with battery life appears to be caused by the Windows ActiveSync software continually trying to make PC contact. To fix this, follow this link: http://www.gpspassion.com/forumsen/topic.asp?TOPIC_ID=56706&whichpage=10 This details a procedure which adds a dummy connection, then sets ActiveSync to manual. As a result, battery life is extended considerably. The Mio software also seems to be a bit of a battery hog. If you just want to log your track, consider Beeline GPS software — it is inexpensive and includes a lot of useful geo-caching functions for quick annotation. 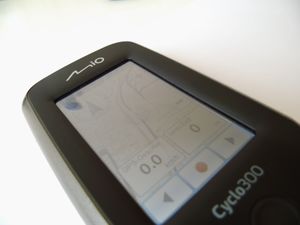 The cyclo series is designed for cyclists and sports men. It supports a lot of benchmarks and comes preshiped with OSM maps that get updated 4 times/ year. Sadly you can't create your own maps and need a Windows PC for track import.