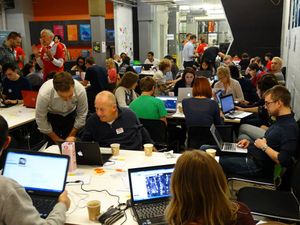 The task for the evening will likely focus on South Sudan at the request of an MSF field team. Task number to be posted on the day.

20:50 End of the night thanks (report contribution of mapathon, volunteers to guide & host at a pub)

Problems with the event itself will be recorded here, along with learnings for future events.

Unfortunately, our original tutor wasn't able to make it due to last miunte circumstances. Anoth HOTty stepped in, but only had one evening to prepare.

Decide beforehand who the backup tutor is going to be and make sure they have access to videos of previous tutorials and slides.

Tasking was organised quite last minute and, while both were worthy tasks, the more urgent of the two probably had less people working on it on the night. This was a result of a rushed preparation.

Tasking should be sorted far enough in advance that it can be printed/written on table top resources/posters. Tasks should be listed in order of priority.

This was a bit of a disaster. It was the first time we tried an orgnaised 'remote attendance'. It is something we'd definitely like to get right as it is a great way to scale up the events without having to find huge venues.

The plan was to have a google hangout on air which would broadcast the opening talks and the tutorial for new mappers. Then, remote participants would move to either a normal google hangout or a skype chat where HOT/OSM people at the event would provide support. A google spreadsheet was emailed to all remote attendees to add their google email and / or skype handle earlier in the day.

A link to the on air hangout emailed out as the event started.

The problem started when the on air hangout limited the number of viewers to ten. Then, there was a combination of problems involving the venue wifi dropping out and the sound from the tutor's mic being terrible quality. It would be great if remote participants could edit this to let us know exactly what went wrong.

Additionally to this, the hangout was overly relied on. In the rush to prep for the event, the wiki page (this page) wasn't updated with the tasks, so when the hangout failed, people who wanted to crack on, couldn't.

despite the little trouble with the google hangouts i had a good time yesterday and got hooked on the whole mapping thing... which I guess was all you wanted.

To improve the "party"- feeling for the remote-mappers it would maybe help to use more of a lower-tec version of chatting thats not so likely to break down? but once i was in the process of mapping i didn't realise what was happening around me anymore anyways. one thing i missed was of course someone looking over my back and telling me how to improve the way i work... Whilst I know that this is impossible for the remote-mappers, some kind of feedback on how the whole map is coming along during the event, or maybe remarks about common mishaps, some tricks and tweaks would be welcome in the chat-window. This way, everytime i finish one of my tiles or make a break I can read whats generally going on with the other mappers around... I guess this could improve the sense of community that we look for, when we attend such an event.

Thank you again for your effort to make this such a nice event. Looking forward to the next time!

Was new to it, apart from the problems it was good event. However maybe a dummies guide could of been sent out beforehand just so people had an idea what to do as for first few minutes was slightly confused.

Also for remote users having both the projects sent beforehand with any ppt slides would have been useful. Also knowing there was two would of helped.

Otherwise good event and very easy to pick up, and have mentioned it to one of my old university lecturers who does cover this sort of thing in a module.

On another note, I saw the other projects when flicking through, can anyone join these? Also is there other missing map projects to get involved in, as think I've got the bug.

Thanks for a good event, minus the technical.

I was unable to join the Google Hangout broadcast as it said it was full?!

I still managed to edit some features as I had watched video as provided in the links.

I was able to participate remotely and work on a few maps. The problems I had are in line with what is detailed in the wiki page. Though I will say that you had done a good job of setting expectations that remote participation was a bit of an experiment, so my mindset going in was that if it worked out, great -- if not I could still be contributing by helping “beta test” the approach.

One question, was it a Google limitation that meant the hangout was limited to 10 participants? We’re hoping to host a series of hangouts around M&E but if there’s a limit of 10 participants that would be problematic.

So for me, I arrived late and was a bit confused that I could see the video, but nothing was really happening. I have never used Google hangouts before, so seemed to end up in about 3 groups where I could just hear people who hadn't turned their mics off, so I didn't really get what that was about. Once I realised you guys were starting late, it was all good, and I could see and hear everything the guy from MSF was saying. Then when it changed over to a guy with a green t shirt, it all went wrong, but I didn't know if it was you or me (I am in Qatar, with not a brilliant connection)! The screen was green, then at one point I could hear a little sound which sounded like videos were being played. And then it just said the presentation was over, so whilst I got the background, I didn't know what I was actually supposed to be doing!

Luckily, I had a friend who was there in person, so she sent me a link to the task and was able to pass on her knowledge, additionally there was help on Skype, but not very instantaneous. So was able to crack on with digitising fine, but then some time later when I'd 'finished' my square, I tried to get another at random but got an error message - I'm guessing perhaps because all squares were locked, but if so it wasn't clear.

That said, I'm really grateful to have been able to take part remotely - so long as people know what they're doing then they don't actually have to all be in the same room, although I imagine it was good all being together. I think it's a fantastic initiative and it's got me signed up to OSM which I've been meaning to do for ages, and will definitely be taking part in future - hopefully contributing a bit more next time!

Thanks for the opportunity and looking forward to being further involved.

Check on the capacity of the broadcast provider for the talks and tutorials. Best if it is not the same platform as the support platforms. Maybe a dedicated broadcast service (livestream or the like).

Hangouts and skype worked for support (again, remote attendees, please correct me if I'm wrong). There was an experienced mapper manning each of these channels.

Additionally, the wiki page should be used as the hub for all remote activities. Resources made available should include:

Lastly, one person at the physical event should 'own' this process. There may be more people assisting (with support channels for example), but one person should take responsibility for being the central point of contact.