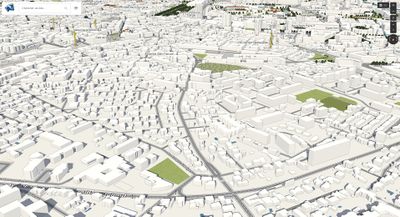 The goal of that import is to update existing OSM buildings of Montpellier with height information (see Key:height tag).

Almost all buildings of Montpellier are already into OSM (thanks to the data import of the French land registry) but there is no height data and so no realistic 3D view of the city of Montpellier is possible.

Luckily enough, the city of Montpellier has an OpenData website where Digital Elevation Models (DEMs) are available under the ODbL licence:

With these 2 datasets, it is possible to calculate a maximum height of each building already present in OSM.

The import should be launched only once in October 2017.

There's no special reduction or simplification since the imported data are elevation ("Z") values from DEM files (DSM + DTM).

For the DTM the files are provided into the DXF format. To be usable by my scripts they are been merged into an unique file and then converted into a GeoTiff file (thanks to ogr2ogr and gdal_wrap). Note also that the DTM has been cropped with administrative boundaries of the municipality of Montpellier because values outside them are not reliable.

On each created changeset there are 2 tags:

The only data transformation is to add a new building:height tag to the way-building, nothing more.

But note that the import is not aggressive: it updates a building only if the relative way element has no building:height tag already present. That way it cannot disturb works of other contributors.

The software itself is available on GitHub : https://github.com/vince-from-nice/osmaxil.

As described above there's no big risk of conflation since the program doesn't touch buildings which have already a building:height tag.

A lot of manual checks has been performed on hundreds of buildings.

Theses checks was based on the Google Earth because the area of Montpellier is covered by the photogrammetry technology of Google so it's very easy to see elevation of buildings and compare them with the elevation of the ground.

At the end I can say that the accuracy is very good, about ~1 meter.

The imports into the live database was done on 2017-11-04 and the settings were like that:

Here are the results:

On certain areas that are on the outskirts of the municipality, the calculated heights are wrong because the DTM provides data at 0 whereas they should be at -9999 (and therefore be excluded). I will obviously correct all this, a priori manually with JOSM.

Edit: finally the problem was concerning too much buildings (5172) so it was fixed programmatically.