As at December 2018 it looks like these are all discontinued and no longer available. 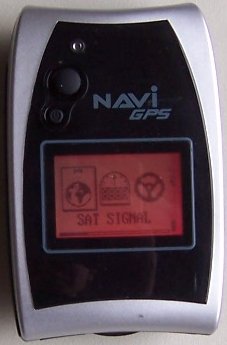 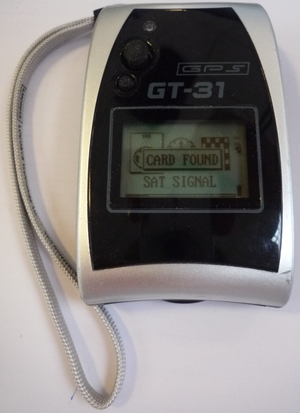 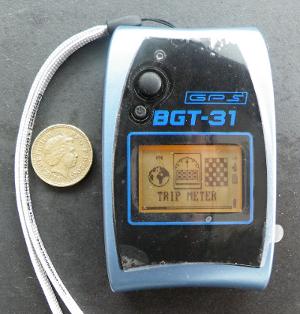 There are now quite a few OpenStreetMap users who own NaviGPS units. This is an owners page containing useful notes for these people. The different Names for this Device range from NaviGPS, NaviGPS-BT, Navi GT-11/BGT-11 (obsolete), Genie GT-31/BGT-31, Amaryllo, JJ-Connect Navigator 101/101BT. It was originally made by Scytex but the product and its engineering team have now transferred to Locosys. If you want to buy one, read the Merchandise page to give OSM a 10% donation for free. Also see NaviGPS for Linux.

This guide is for anyone who has never used a NaviGPS before and just wants to go out and record some tracks (assumes you have a memory card installed).

Not all memory cards work in a NaviGPS. The Locosys website states that the unit provides a 2.8 V supply to the card, so any card with an equal or lower minimum voltage should work.

The following cards are known to work:

Known to NOT work

This was provided in an email from Scytex support):

The following notes relate to setting up a NaviGPS from new for use in making tracklogs:

If you've arrived home to find that your SD card can't be read by your computer, there is a chance you can recover some files using PhotoRec. PhotoRec will scan through the card, ignoring the partition information, looking for file headers. It will produce some files that have been renamed with numbers (not original file names). A program like grep (for GNU/Linux) might help you sift through to find the resulting files. Try "grep 'dd,mm,yy' *txt" where dd, mm and yy are replaced by the day, month & year you're looking for respectively.

Such corruption has been known to occur using development firmware (B0608T) on a known good card model. Please stick to stable/formal firmware releases to avoid disappointment.

There are several ways to obtain data from these devices.

This usually is the easiest way. Set the device to log to files, then retrieve those files from the SD card. To convert them to GPX, use gpsbabel:

If not using card to directly store data, or in case card gets corrupted, you can copy internal log contents to a card. This uses binary format. To convert such a file to GPS, again, use gpsbabel:

Note that datalog part is important, otherwise only partial data is retrieved.

Make sure to use whichever ttyUSB device your device sits on. lsusb will list it as Prolific Technology, Inc. PL2303 Serial Port.

The firmware update software for Windows can be successfully run under GNU/Linux via Wine (you need to configure the serial connection for Wine - see over there). 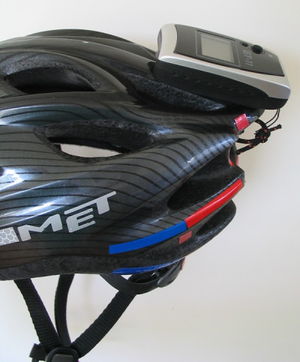 GPS mounted on back of helmet using velcro. Note string for safety.

The NaviGPS is light enough to be barely noticable when mounted on top of a cycling helmet. For track logging with occasional waypoint recording, this is quite an effective setup as it gives the unit the best view of the sky. To record a waypoint, you simply reach up and press the joystick till the beep is heard.

Velcro dots are sufficient to hold the unit, though you'd be wise to also add a string just in case.

The Locosystech (B)GT-11 is identical to the Scytex NaviGPS and the predecessor of the (B)GT-31 (older SiRFstar chipset). In the Netherlands, it is known under the name Amaryllo Trip Tracker

A compact GPS with basic navigation capabilities and data logging. No facility to display a map.

The GPS performance seems to be acceptable. It emits a nice bleep sound and flashes a red light when it achieves satellite lock, which is nice and reassuring.

The unit is solid, well-constructed and quite compact. It is waterproof (useful if it rains, or for other forms of wet mapping) It contains a non-replaceable rechargeable Li-ion battery with a maximum life of 32 hours. The standard version comes with a car charger as standard. Both models have a USB connection for upload and recharging. The ability to recharge via the USB cable is a very nice feature. It also comes with a standard adapter for recharging from a car and the most compact and nifty 240 volt mains adapter I have ever seen.

The screen is small (33×21 mm; 128×64 pixels), but quite readable in daylight with mostly clear displays. The status symbols on the right of the screen (2D/3D, battery indicator, etc.) are quite small and hard to see (with my eyesight). The backlight is red, which is a bit unusual (maybe it's intended to preserve night-vision?). It is easy to accidentally set it permanently on, or permanently off, rather than the default auto-off mode.

It has only two buttons for operation — an On/Off/Escape button and a joystick-like button for menu navigation. The joystick can be operated, albeit a bit clumsily, while wearing thin gloves and riding a bicycle. Not sure if it would be possible while wearing very thick gloves, such as ski gloves.

The manual comes as a PDF document on a CD, or can be downloaded (see below). It is well written (for a Taiwanese user manual), and runs to 66 pages. The editor's introduction is written from the heart and is a nice touch.

It has all the standard basic GPS features — routes, waypoints and track-logs, but no map display. A trip meter is provided that is clearly designed for the cyclist. It also has configurable alerts for speed, altitude and destinations, which some people might find useful.

It comes with a simple Windows application for uploading/downloading routes, waypoints and trackpoints. Installation of the USB serial driver was a bit fiddly, but otherwise it works fine. In the software "Version 1.1 B20060228" there are two main download options (Oziexplorer/GPX/CSV and Waypoint+) in addition to the raw NMEA files. This software version also uses GPSBabel to export the data in KML format suitable for use with Google Maps and Google Earth. There is a backup/restore function which creates a 512k binary file which I suppose is a dump of its flash memory.

For Linux users, the Windows application appears to work OK using Wine. The USB interface on the device is supported by the pl2303 driver and appears as a serial port, e.g., /dev/ttyUSB0) providing raw NMEA data for gpsd or gpsdrive. Some further Linux information is at NaviLink for Linux. This page includes a link to a page describing a Perl script that can be used in place of the Windows program provided with the device.

Recent versions of gpsbabel can read the GT-11 memory directly. It may be necessary to use superuser privileges (su, sudo), but a console command of the form: gpsbabel -t -w -i navilink -f /dev/ttyUSB0 -o gpx -F <pathname/filename> works, including waypoints within the gpx file.

It has a slot for an SD memory card which records tracks in NMEA format. A new log file is started as soon as the device is turned on and records continuously. We assume a:

The SD card track log data cannot be read via the USB cable. You need to remove the card and use an external card reader.

Initially the device failed to write any data to my SD card, but it worked fine after selecting the "format card" option. The same card had been working fine in a digital camera, so perhaps the NaviGPS is a little fussy about the formatting of the card (that's probably because the NaviGPS expects the card to be formatted without a partition table and will not use the card if it contains one).

To convert the track logs from NMEA to a format usable by OpenStreetMap, see the NMEA page.

Seems to be ideal for the cyclist capturing tracklogs for OSM. Excellent price.

The PDF manual for the GT-11/BGT-11 is available from the Locosys Technology Web site.

Getting Routes from Google Maps

I have written a simple Perl script for grabbing routes from Google Maps in KML, and converting/saving them to .wtp/.rte format. The usage is:

This could be made more generic quite easily — it is just a first stab! I wrote it out of frustration at my inability in getting useful information onto the device.

It is available at http://ave.wrigley.name/gmap2ozi.pl.

It has been suggested that this page be translated into Portuguese as well as other pages in Category:Translate to Portuguese.
Você pode ajudar a traduzir? Por favor, considere a terminologia recomendada na referência.
Retrieved from "https://wiki.openstreetmap.org/w/index.php?title=NaviGPS&oldid=2082890"
Category:
Hidden category: