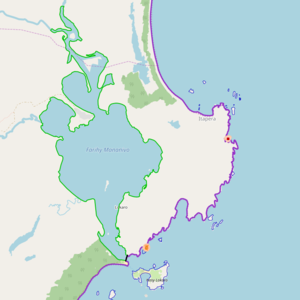 The Coastline view in OSM Inspector shows problems with coastlines. Show it...

Proper coastlines and, generated from them, land or water polygons, are essential for many maps. But it is difficult to get the coastlines mapped without any errors. This OSM Inspector view helps with finding all the errors in the coastline.

All data in this view is derived from OSM data. The OSMCoastline program is used to assemble the coastline data and all errors that show up in this process are shown in this view.

Data for the whole world is available in this view.

The most important rules are: Land is always to the left of coastline ways, water is to the right. Coastline ways can never just stop in a dead-end, they always have to be connected to another coastline (or themselves).

Coastline shows all ways tagged natural=coastline. This is the only layer thats not showing some kind of problem. This layer is only shown in higher zoom levels when the detail is important and drawing is faster.

Not a ring means that the coastline could not be formed into a complete closed ring. Either there aren't enough points or the coastline is not closed. This is never supposed to happen and must be fixed. Use the "Coastline error points" layers to find the specific problem and fix it.

Overlapping lines are ways tagged with natural=coastline that overlap. This is not a problem in every case, but should be fixed if possible.

Typical overlap case. There is one island here that has been drawn in two parts.

Invalid geometry shows coastlines that are invalid for some reasons, for instance because there are self-intersections or so. This is somewhat of a catch-all, i.e. it is shown when we can't give a more specific error message. Fix all specific errors shown on some other layer on this coastline and this error should go away also.

Wrong direction shows coastlines that go in the wrong direction, i.e. the land is not on the left. This should be fixed. But be careful, this error often is the result of another error somewhere else. This can happen if there is a body of water inside a continent. If the continent has some error the body of water inside might be flagged here, but is perfectly okay. Direction errors can be fixed quickly by loading the data into JOSM, selecting the way and using the "r" key to reverse the way. Put some aerial images in the background and you can usually see immediately if a way really has the wrong direction.

Unconnected shows points where the coastline ends. This is, of course, never supposed to happen and must be fixed. Usually there is another unconnected end somewhere nearby and you can just connect them properly. Sometimes a (longer) coastline way has been deleted and there is now a larger gap in the coastline. In this case it might be best to find the deleted way and un-delete it.

Intersections show places where the coastline intersects itself. This is never allowed and must be fixed. This often happens when there was say an island somewhere that was only roughly drawn and somebody drew a better outline on top and forgot to remove the old island. The coastlines for the old and new island outline now intersect. Remove the version thats not so good. If you see many intersections right next to each other it can mean that there are two coastline ways on top of each other.

Not a ring shows points in a closed way tagged natural=coastline with only 1 to 3 points which doesn't form a proper ring. This is never supposed to happen and must be fixed.

Double node shows nodes that appear more than once in a coastline. This must be fixed. Note that double nodes can also show up as some other error depending on the exact configuration.

Tagged node shows nodes that are tagged natural=coastline. Because ways and not nodes should be tagged this way, this is probably an error. This happens sometimes when a node was selected by accident when somebody wanted to add the tag to a way. Some people use this tag to mark headlands, cliffs, bays, or other features related to coastlines. Use the proper tag instead.

What you can do with this view to improve OSM data