The old osm-matrix tool no longer exists, but is worth documenting for historical interest. The tool was developed and used very briefly during Haiti earthquake response mapping in January 2010 and forms a part of the early history of the OSM Tasking Manager The tool allows people to assess the completion of squares of the map, dividing the map into a grid. As such, it appears to have very directly inspired QualityStreetMap (aka OSMQA), and this went on to inspire the OSM Tasking Manager (The tasking manager is quite different, more for coordination than assessment, but features the same grid dividing idea) 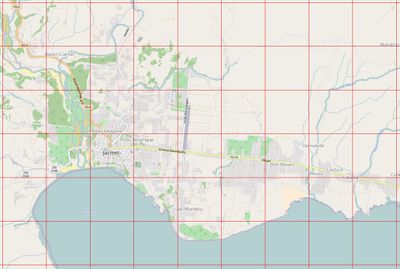 The osm-matrix grid. This is not an actual screenshot, but reproduced using an original grid GPX file from the tool. The tool originally showed squares in different colours indicating assessment scores 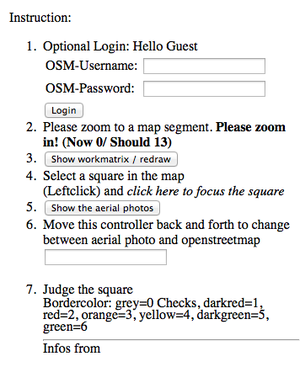 Part of the interface still visible in the waybackmachine. The final step in these instructions shows the assessment users were asked to make

Development and use in Haiti response

osm-matrix seems to have been developed by Monty Muth m0nty.de. Some osm-matrix code remains in SVN: https://trac.openstreetmap.org/browser/subversion/applications/utils/osm-matrix . However this appears to be only a perl script to generate a grid GPX file, not the code of the website. This perl script is Jan Tappenbeck. GFDL licensed.

We can delve into the email archives to investigate how the tool was developed and used e.g. email ail from Karl Guggisberg describing its use. Other than that, we have to go on memory.

The tool appears to have come online towards the end of January. Quite quick turn-around, but not fast enough to help much with the spike in editor interest (and confusion of new users) occurring during the early days/weeks of the mapping response. Also because a more ad-hoc mapping coordination approach had been used up until that point, the tool didn't attract contributors in enough numbers to really arrive at an accurate and up-to-date view of mapping completeness levels, except perhaps in some particular focus regions where a strong effort was made. The community was also struggling with several other types of coordination challenge at this point. We had dozens of different imagery datasets available, and an import of medical facilities data in progress at the time.

The tool didn't have the impact it might have had if it had been available at the time of the earthquake, and take-up at this later stage was probably something of a disappointment to the developers, however the tool showed interesting potential and (as mentioned above) paved the way for QualityStreetMap and later OSM Tasking Manager.