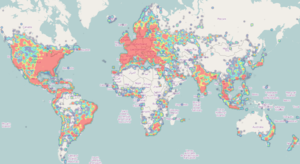 OpenCellID is the biggest open source database of Cell IDs (GPS positions of GSM cell towers) and is generated by a community similar to the OSM community. Map data is from OpenStreetMap licensed under ODbL 1.0; tiles under CC-BY-SA 2.0 and OpenCellID database under CC-BY-SA 3.0

Data is available both from the API or downloadable completely as CSV files.

A German, English, French, Spanish and Polish version is available.